With no particular interest, no knowledge of setting up, maintaining, and working in archives, Sister Mary Chackalackal succeeded in doing it very well. In eleven years of hard work (September 2000 to August 2011) Sister Mary accomplished setting up one of the best treasures of India Province – Mokama Archives. Sister Mary shared that, “When the provincial asked me to discern about setting up a room for the archives in Mokama for the first time, I had no particular interest in it and tried my best to get out of it. I told Sister Bridget Kappalumakal, provincial, that I did not even know the ‘ABCs’ of working in Archives.”

Nothing stops Sister Mary once she takes up a task. She traveled to Dharan, Nepal to learn computer for six months. She also taught there part-time in the school and she was called to replace a Sister in mission when needed. In those days it was rare to have a computer for the use of our Sisters in small communities. Most of the Sisters were getting used to the idea of computers slowly. 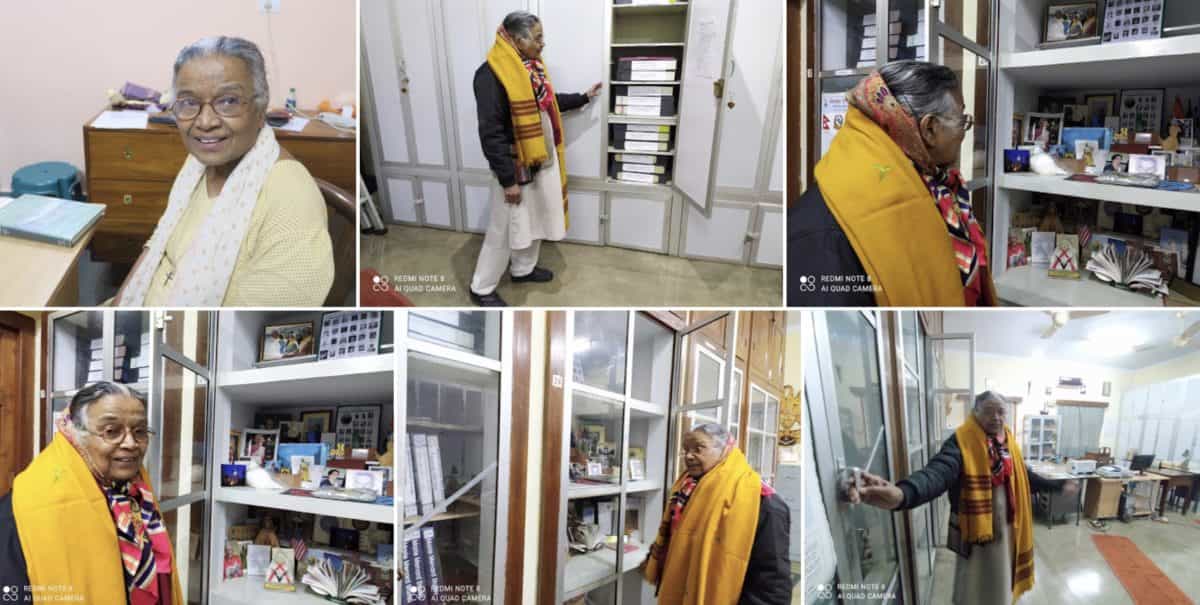 At first Sister Mary set up the archives in one of the small rooms in Shalom, the retirement facility at Nazareth Convent, Mokama. During their visit, SCNs Maria Vincent Brocato, president, and Shalini D’Souza, vice-president, suggested shifting the archives to a better place to the spacious library, the present Archives. All preparations were done to shift the library books to poustinia (a rather large room on the second floor of the convent). Since the poustinia had no beams and could not take the weight of the books, the novitiate classroom was chosen for the library, the present-day library.

During her global exchange in 2001, she spent two weeks at Nazareth Archives. The archivist helped her much with the layout and arrangement of articles. They also gave her a few books on Archives to bring back to India. After she returned, the work began in earnest. After researching in the Archives of the Patna religious congregations, Sister Mary drew up a detailed blueprint for the entire Archives for approval by the provincial. It was a big day when Reverend Mathew Uzhuthal, parish priest of Mokama blessed the Archives on Aug. 17, 2002. Teresa Xavier Ponnazhath, SCN, a resourceful person, helped Sister Mary for two years in collecting important materials and selecting what should remain in the archives.

After completing the setup, Sister Mary felt satisfied. She exclaimed that our Archives is one of the best she had seen in India. She said, “I have received many compliments from the visitors to the Archives.”

While working in the Archives and maintaining the library, she also taught a three-month English course to the new nursing students at Nazareth School of Nursing of Nazareth Hospital every year. She said, “Working in the library and the Archives was one of my longest consecutive assignments in one place.”

After closing down the Almora house in October 2012, during Sister Mary’s retreat in Ranchi, Sister Ann Palatty, SCN, provincial of Bangalore province asked her to discern once again about her choice of province. Sister Mary shared, “As I discerned with some of my close friends and the retreat director, I felt at peace remaining in the Patna province. I was appointed to Mokama to teach the candidates English and community history to the novices. I also taught English to the young women of the ‘After Care Home’ at Nazareth Hospital, Mokama from its inception in October 2014.”

In September 2018 Sister Mary returned to the Archives, a second time happily. She expressed that her happiness was short-lived when she found out that some of the original documents were destroyed. As she continued to minister in new ways she highlighted the contributions of all the American Sisters who have ministered in India and framed their photos and hung it in the corridor near the dining room at Nazareth Convent. She also gathered the obituaries and the photos of our deceased Sisters in India. She collected the photos of all the Sisters who made their First Vows in India from 1959 onwards. Her desire to print individual photos of all our Sisters and to keep in an album is underway.

Sister Mary’s commitment, determination, meticulous planning, hard work and ever the willing spirit of doing the best for God and community never diminished till the very last day – Jan. 30, 2021, she served in the Archives. She researched the old province and Congregational documents, letters, and Mission Newsletters/SCN Sandesh from 1968 to 2020 to list the names of all Mothers, Mother Generals, Superior Generals and Presidents and wrote a short summary on all of them and provincials in India, formation directors, coordinators of ministries, Province Council/Board members, administrators of important local houses, principals of schools, different important committee members, treasurers, and secretaries of the provincials, archivists and communication coordinators of the provinces.

Sister Mary feels that her second coming to the Archives is a real blessing for her and for the Archives. She moves on in life with a very grateful heart for all that God has accomplished through her.

As a very prayerful person, Sister Mary deeply loves her God and community. Her aesthetic sense, neatness and orderliness are evidenced by anyone who enters the Archives and the library. Sister Mary, as you move into a life of prayer, contemplation and rest in the latter days of your life, we, in the archives will miss your continued presence, valuable guidance out of your self-taught and acquired wisdom and knowledge. I am sure the members of both the India provinces will affirm it with me. We are proud of you and wish you the very best, Sister Mary. May you enjoy the leisurely time of your life loving God, yourself and we, the community. You have left an indelible mark in the history of our Provinces in India!