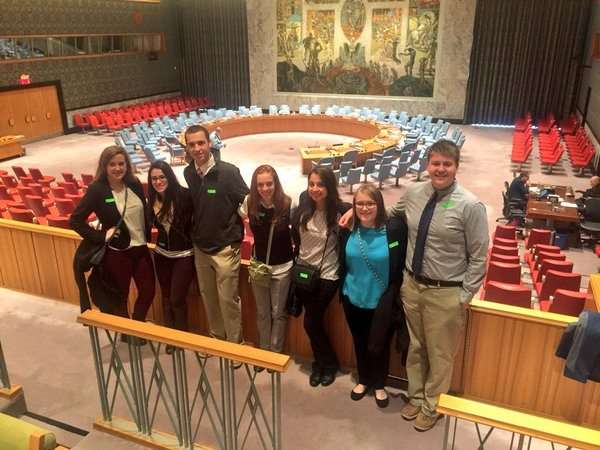 It all started with a passionate group of students who wanted to be informed, be involved, and be inspired. With this inspiration, a new Model UN Club was formed at Vincentian Academy in Pittsburgh, Pennsylvania, with the mission to achieve academic success, nurture faith, discover and develop talent, and live the Christian values of respect and service.

“Vincentian Academy’s mission is more than just education. It is helping the world in Christ’s name. By taking this trip, I had the opportunity to learn more about how I can help the world,” said Colleen Ballantyne, a senior student who traveled to New York.

The Model UN Club provides a perfect forum for students to be informed, involved and inspired. “Being knowledgeable empowers students to be successful. There is no better way to empower a student than by connecting them to experiences of the world,” said John Fedko, president of Vincentian Academy, who approved the trip to the United Nations.

Students eagerly anticipating inspiration from @TKotturan regarding her work & work of @scharityfed with @UN. pic.twitter.com/9TDGw8z68p

The students visit to the United Nations was highlighted with a visit with Sister Teresa Kotturan, a Sister of Charity of Nazareth, who represents the Sisters of Charity Federation at the United Nations. The meeting consisted of a tour of the United Nations and a question and answer session covering topics such as standing up for human rights, sustainable development, poverty, care of the earth, inequality, and climate change. Sister Teresa specifically discussed the 17 sustainable development goals and the UN Charter. She challenged the students to take one goal on as their own, and help change the world in their own incremental way. “It was incredible to see the connection that our students made with Sister Teresa as they embraced her global philosophy,” said Anne McDonough, Vincentian Academy faculty member and faculty sponsor of the Model UN Club. “I believe they are forever committed to their moral obligation as US citizens to take a stand on world issues and make a difference,” added McDonough.

The Vincentian Academy Model UN Club also visited the 9/11 Memorial at Ground Zero and reflected on the tragedy and heroism of fellow Americans of the Sept. 11, 2001, terrorist attack on the United States. “We all immediately wanted to pray as soon as we set foot at Ground Zero. The atmosphere was solemn and quiet,” said Colleen Ballantyne.

Ed Bernot, Vincentian Academy principal, who accompanied the students to New York, commented, “From an educational standpoint, it was a strong representation of history right before our eyes that the students could touch and see.”

Returning to their classrooms in Pittsburgh, the students will continue to learn about the UN and choose one of the UN’s sustainable development goals to work on as a Model UN mission. The group will create service projects and will compete in Model UN competitions. “This opportunity opened up our eyes to a better understanding of world peace and cooperation,” said student Victoria Thacker.

“I am confident the senior members will be great ambassadors to Vincentian Academy, Model UN, and will help lead the underclassmen through Model UN, our International Club and their classes,” stated Anne McDonough. The Model UN Club at Vincentian Academy is now inspired to make a difference and involved to invoke opportunity, because they are indeed better informed about ways to open doors of peace and access for everyone, particularly those in greatest need.