It is hard to believe 72 years have passed since the first six Sisters, impelled by the love of Christ, traveled in 1947 from Kentucky to Mokama, India. The Sisters quickly established Nazareth Hospital, the first mission of the Sisters of Charity of Nazareth in India. Could they have imagined that seven decades later the same campus would be teeming with ministry in so many and varied forms?

Among the areas seeing the greatest growth is Nazareth Academy, which opened in April of 2012. The opening of the school was in response to the needs of the area. Families in Mokama had long wanted a school in which classes were taught primarily in English. The school opened during the Congregation’s bicentennial year.

Seven years later, the school has seen tremendous success. What started with 26 children and two SCN teachers has grown to hundreds of students, thriving in the school’s rigorous academic setting. Such is the case with Shantanu Kumar, a very bright student of class five, who was recently drawn to try military boarding school but missed the academy and returned, “I like my school – Nazareth Academy, Mokama.” Shantanu had been well prepared, and in fact stood second among the 1,400 candidates on the entrance exam into military boarding school.

Top left: Rena Fernades, SCN, enjoys working with students of all ages at Nazareth Academy, Mokama, India. Top right: Students have access to a number of courses taught in English. Bottom left: Rena Fernades, SCN, is pictured on a construction site for the school as it expands to meet the needs of a growing student population. Bottom right: Sisters minister in a number of capacities at Nazareth Academy.

Not only does the school emphasize academic excellence but strong moral values as well. It is because of the reputation of the school that enrollment is increasing. Initially the school began in two classrooms of the parish owned St. Xavier School. After nine months, the school was moved to the renovated old hospital buildings. Today the school is “bursting at the seams” with 600 students and 30 staff members.

The school is also having a ripple effect in the community, as more girls in the area are encouraged to pursue an education. When a boy is brought for admission, parents are encouraged to enroll their girls as well. If parents need financial assistance to make this a reality, assistance is arranged. The school is also helping to empower mothers, who often stay within the confines of the home because of cultural norms. The school strongly encourages both parents to come to the school on the second Saturday of the month. It is time to meet with the teachers and to ask about the progress of their children. Many of the parents, especially mothers, speak of being grateful for the opportunity to collaborate with teachers and support their children.

Top left: Anila Monippallikalayil, SCN, is the administrator of Nazareth Academy, Mokama, India. Top right: Many Sisters minister at the academy which empowers young men and women in the village. Bottom left and right: Students enjoy a variety of classes and daily traditions at the school in Mokama, India.

Today, five Sisters are in ministry at the school including Rena Fernandes, SCN, the first principal. She is not at all surprised by the school’s far-reaching impact. Sister Rena had predicted just such a future on opening day in 2012, “with the cooperation of the parents, parishioners, local leaders, and wishers, we can make Nazareth Academy a very good learning center for the children of Mokama and surrounding areas.”

Currently, expansion and upgrades are necessary to meet the requirements of the growing student population. Construction is now underway to include the building of two floors of classrooms, a staff room, computer and science labs, a library, and bathrooms to ensure quality education for students.

Through this educational ministry, the Sisters will continue to have a positive impact in Mokama for generations to come. 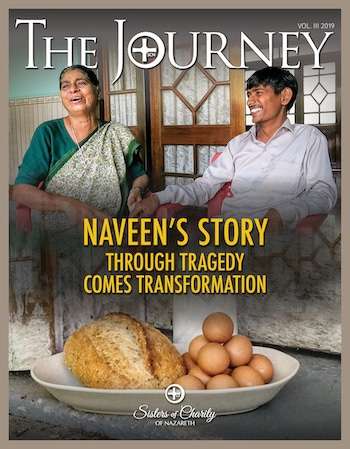 This story was featured in the latest edition of the Sisters of Charity of Nazareth magazine, The Journey.