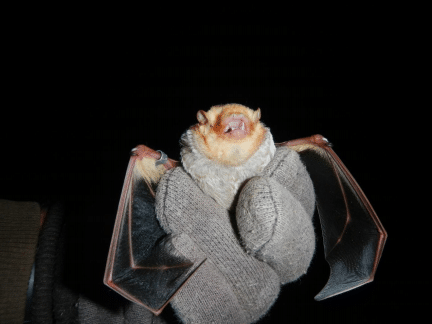 The Sisters of Charity are celebrating this Halloween news that six species of bats (one of them a threatened species) have been found at Nazareth. The bats were discovered as part of a commitment to document animals and plants that call Nazareth home.

SCN family members, like Ecological Sustainability Director Carolyn Cromer, are excited about the discovery. “One of my hopes when we began the biological surveys of Nazareth this year, was that we would find some plant or animal species that are threatened or endangered. While protecting and enhancing all wildlife habitat is important, those species whose populations are at risk of extinction are especially deserving of our protection.”

Scientists have discovered a federally threatened species at Nazareth, the Gray bat. In addition, two other species detected at Nazareth, the Little Brown bat and the Tricolor bat, are candidates for federal listing.

According to bat biologist Gary Libby in his survey report,“the Gray bat uses caves and cave-like dwellings during both the summer and winter. There are no caves or cave-like dwellings at the study area (Nazareth), so these bats are likely coming from outside of Nazareth to forage and drink in the area. Gray bats are known to fly long distances during the night, sometimes as far as 30 to 40 miles… Little Brown bats, and Tricolor bats use the study area for foraging and drinking and possibly roost in the area as well.”

‘Threatened’ is a legal categorization under the Endangered Species Act that means that a species is likely to become endangered, or at risk of extinction, in the foreseeable future throughout all or a significant portion of its range.

Scientists say it speaks to the high quality of habitat at Nazareth and the Sisters’ intense commitment to wildlife habitat enhancement and protection. It also reflects careful land stewardship over the past 200 years that has provided a home for these species today.