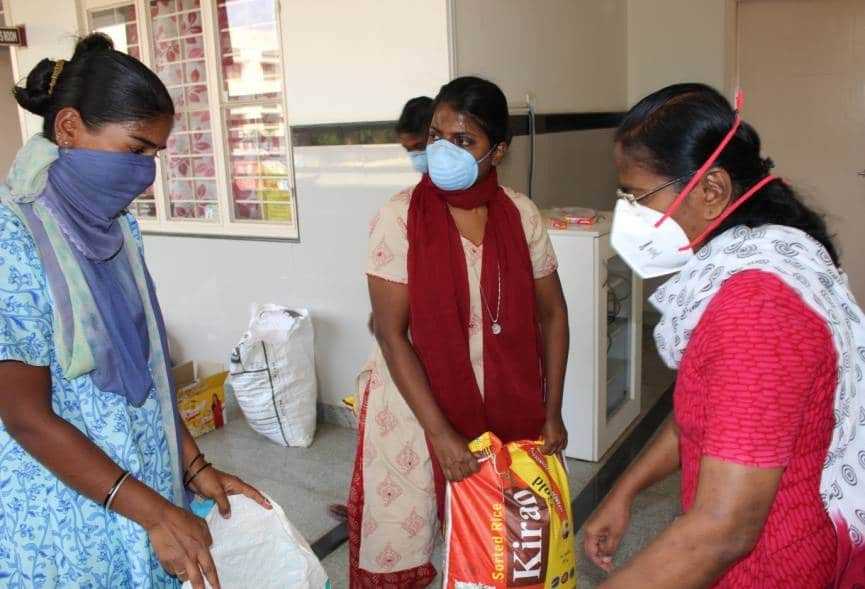 Bangalore Province – April and May 2020

The Sisters of Charity of Nazareth (SCNs) in Bangalore Province have reached out to the victims of COVID-19 in most of the places they minister from the first week of April 2020 as the countrywide lockdown had affected the daily wage workers, the migrants and the poor in India.

In Chandapura we sought the permission of the inspector of Surya City Police Station, Anekal and with that permission letter, two of our sisters visited a few houses around our Convent to find out how they were managing. The families said that they got some food supplies from the government through the Panchayat in the beginning and after that, they were struggling to meet both ends meet.

So far we have distributed food supplies to a hundred families. The Surya City Police Inspector and the Local Counsellor requested if the Sisters could give dry ration for two hundred and fifty migrant workers who are put up in a local government school. Since we could not visit the migrants at their shelter, we reached the supplies to the police station. After a few days once again they requested another group of two hundred migrant workers from Karnataka and other places. Again we provided them with the necessary food supplies.

Some of the migrants from Heelelige railway station near Chandapura requested us for food materials by themselves. While distributing the food supplies, to keep safety measures in place we called five to ten persons at a time and distributed supplies to each one. Thus so far we have given food kits to 100 families, consisting of 395 persons for a month; and also a total of 600 individual migrant workers from Karnataka, Odisha and West Bengal are given separate food packets for two weeks in Bangalore.

Sister Jessie Saldanha SCN who works at St. John’s National Academy of Health Sciences, Bangalore as the Head of the Pharmacy Department is working round the clock to provide the needed stock of both medicines as well as other PPEs. In fact, she herself designed the PPE and sought the help of the Religious sisters nearby to stitch the same, in order to provide the needed kits daily.

The SCN Sisters are doing similar charitable activities of helping the poor families and individuals elsewhere too. In Kerala, the sisters have given food kits to 180 poor families in Wayanad district and helped to get food for 150 migrants through the Government in Kozhikode district; Sister Joicy Joy is giving online counseling.

In Maharashtra, the Sisters have distributed food packets to 200 adivasi poor families in the Vasai area.

In New Delhi, the SCNs have given food kits to 400 families of slum dwellers in Seelampur.

Other than food supplies, we have given face masks in Delhi, Andhra Pradesh, and Kerala.