Sisters and Bihar women rise up for Indian daughters’ safety 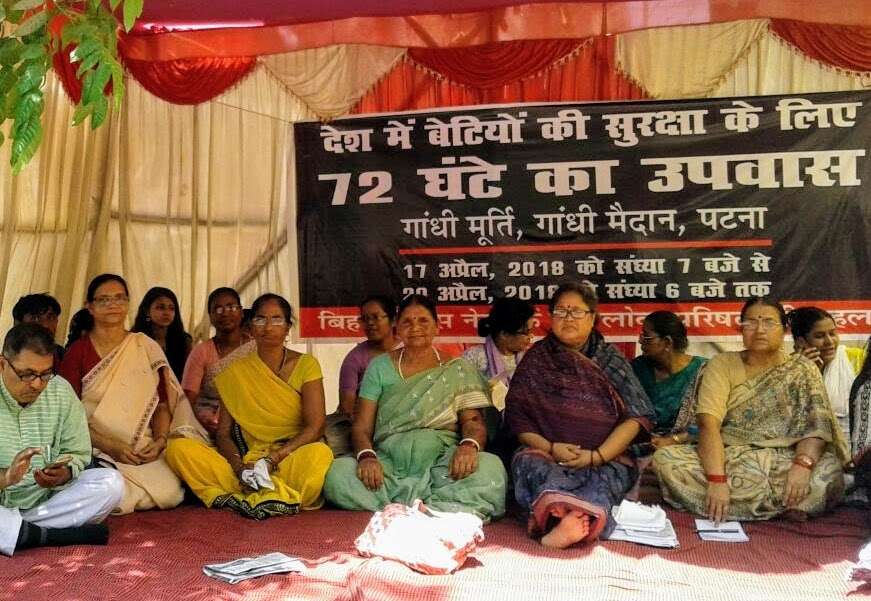 Catholic religious women joined more than 25,000 people of Bihar to undertake 72 hours of fast to demand security for the daughters of India.

Nine women and men fasted continuously during April 18-20 while others joined them in relay fast, Rupesh, (goes by one name) of the Bihar forum of ‘Right to Food,’ one of the organizers of the program, told Matters India.

The program was held at Gandhi Maidan in Patna, a historic ground near the Ganges River in Patna, the state capital.

Politicians from different parties and the administration also attended the program, which, Rupesh claimed, has helped awaken the people of Bihar in many ways. “Our hope is that the government also wakes up to bring law and order in our nation,” he added.

Rupesh said the Bihar Women’s Network and the members of ‘Right to Food’ forum are organizing protests at various parts of Bihar demanding accountability from the government machinery and the people’s elected representative.

Neelu Devi, convener of Bihar Women Network, another NGO, termed as irony that the government on one hand coins slogans such as ‘save daughters, teach daughters’, while on the other protects the perpetrators of crime against the same daughters.”

She stressed gender sensitization to create awareness in society about the plight of women. She wants the government to introduce it as a subject in school curriculum. Parents have to treat sons and daughters equally in the family, only then will society will respect women and girls as equals, she added.

Nazareth Sister Leena Padam, a social activist who joined the fast, noted a rise in the crimes against women and young girls, giving the impression they are not as equal as men in the Indian society.

“Women’s voices are silenced. The patriarchal mindset overpowers us. It is sad that we are chained and we cannot be independent, self-reliant and free in the Indian society,” the Nazareth nun bemoaned.

Surya Kant, a male student from the School of Social Work in the Patna College, said, “With the support of the ruling party, some sick men continue to degrade women for they know they can easily get bail for the crime against women.”

Mamen Mehtab, another student of Patna College, expressed the hope for a better tomorrow. “Women do not feel safe or get their due rights in the Indian society,” he said. He joined the fast to show his solidarity with the women who stand up for women’s safety and rights.

Present at the program was a mother with her minor daughter from Jehanabad town who was raped by her teacher in a government school. She said she joined the struggle with the hope that their involvement would prevent further rape and murder of another girl in India.

Pratima Devi, another woman who lost her daughter in domestic violence, joined the fast to get justice for her daughter, who murdered in her husband’s house. The government must give severe punishment to those who rape young girls so that no one dares to commit such heinous crimes in the future, she added.

Indu Devi from Khagadia who was on the 72-hour fast, said the girls are not objects to be treated like objects and be thrown away, as it is happening in India.

Prabhakar Kumar, a teacher of Social Work from Patna College, noted that some men with mental disorder believe that having intercourse with young girls will heal their sexually transmitted diseases. “It is a superstitious practice and with regard to women a lot of Indian men are still superstitious,” he added.

Urmila Devi, who was at the fast, said they hope to create awareness “in a small way among people” by joining hands with the men. “Our desire is that this movement spreads to other parts of the country in uniting people. It will make politicians and the government machinery accountable to the people who elected them,” she added.

Nazareth Sister Jackulin Jesu, administrator of Kurji Holy Family Hospital, also joined the program. “I want to support the women who stand up in support of women’s safety and I want to be seen and heard that we will not tolerate injustice against any girl child,” she told Matters India.

She said the hospital staff members attend the protest to become part of the movement by for women’s safety.

Neelu Devi says the momentum of their movement will continue until they get surety from the government for redressal of crimes against women on a time-bound basis.