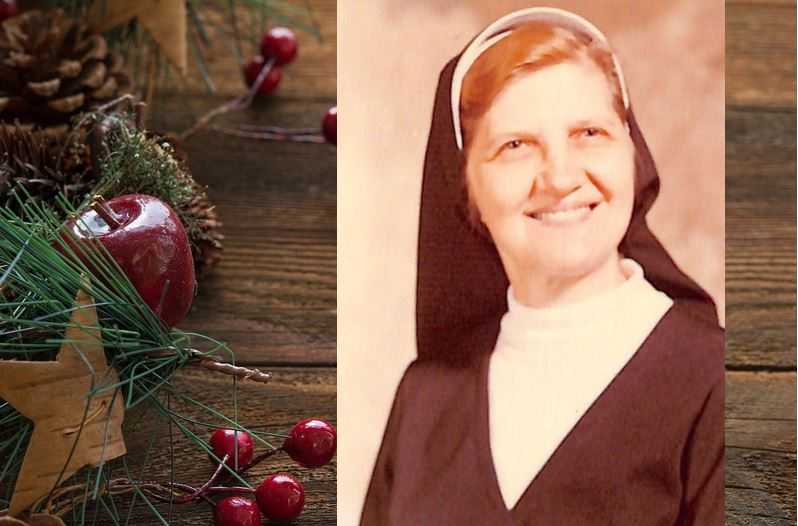 Sister is referred to by both her baptismal name ‘Anna’ and her religious name ‘Teresa Margaret’ in this story.

Anna Rose Bransky was born on August 31, 1921 in Leckrone, PA. Stanley and Susan (Honeygosky) Bransky had eight children. In order of their birth they were Mary, Steve, Frances, Joe, Frank, Anna, Pauline, and John. Little Frances died when she was only two months old, opening the gates of heaven for her family members. Stanley was a coal miner and a very active parishioner; always offering to help those in need. Susan (also an active parishioner) was a housewife; a good and gentle woman. Both had a strong faith and they raised their children in the Catholic tradition. Every time anyone in the family entered the home, they were instructed by their parents to say the short prayer, “Praised be Jesus Christ” in Slovak.

Anna first lived in a company house provided by the mine her father worked for. Around the year 1925, the family moved to a farm on the outskirts of town. Later, her maternal grandparents moved in with them as well. They were a closely-knit family who shared, helped, and cared for one another. Their neighbors were like an extended family. Whenever a big job needed to be done on someone’s farm, all of the neighbors gathered together to help one another. When the work was finished, they stayed for a big dinner of stew with plenty of pie for dessert. The meal was served outdoors on long tables with benches under the grapevine.

Sister remembers that they had a glorious time living on the farm. She and her siblings got along well; a favorite pastime was playing baseball together. They loved to be outside playing games like hide and seek, hop scotch, and jump rope. The whole family also shared a passion and talent for music. After her grandfather passed away, Anna’s father built a house for her grandmother on the family’s property. While a log cabin was being torn down to make room for the new house, a snake surprised them by hanging down from the beams within striking distance of some of the workers. A neighbor quickly shot the snake and saved the day. Once the new house was built, the children took turns staying at their grandmother’s home. 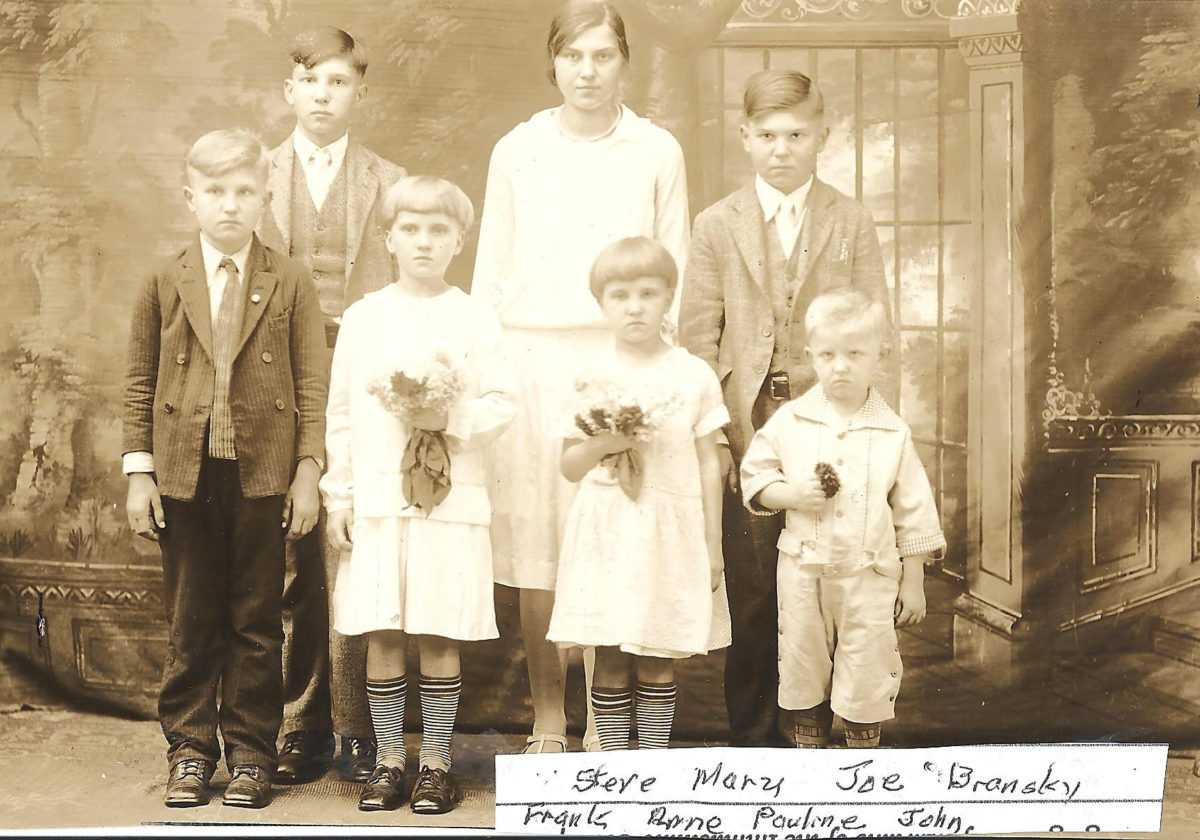 Anna went to St. Mary’s Catholic School for all eight years of her elementary education. There she was taught by the Vincentian Sisters of Charity. She remembers all of her teachers as being so special and kind. Eventually, Anna’s father left work in the mines and got a job in real estate. He traveled back and forth to Uniontown for his work. When Sister Agilberta Bogner, VSC, learned that he was making the trip, she let him know that he could help the Sisters by taking them to Uniontown and back when he went.

For high school, Anna went to German Township Public High School. After graduating, she was employed as a secretary for her father’s real estate business where she spent most of her time typing leases for him. From this job, she went to St. Joseph’s Nursing School in the South Side of Pittsburgh. The nursing school was staffed by the Sisters of St. Joseph. There, she often heard, “Ann, you would make a good Sister, join us”. It was not long after that Anna felt a strong desire to enter the religious life. She was, however, more familiar with the Vincentians than the Sisters of St. Joseph and, after making a novena to St. Therese of the Child Jesus and much encouragement from the Vincentians at St. Mary’s Convent, she made the decision to enter the community of the Vincentian Sisters of Charity.

When Anna told her parents that she planned to become a Sister, she got very different reactions. Her mother was very happy with her decision but initially it was difficult for her father to accept. Her brother Joe was also somewhat unhappy at hearing the news. He was engaged to be married and wanted Anna to be in his wedding, not in the convent. Anna told him that she had made her decision and he would have to choose someone else to be in his wedding. Both her brother and her father were eventually supportive of her entering religious life. Her father proved it by providing her with all of the things that she needed to enter the community. Her family felt blessed to have one of their own as a religious.

On the day that Anna entered the Vincentian community, her sister Mary had pneumonia and Pauline was caring for her. So it was that on February 2, 1940 she bid farewell to her dear family and only her brothers took her to the Motherhouse of the Vincentian Sisters of Charity with Steve, the oldest, driving. Mother Ignatia Butka greeted her with a kind and hearty welcome.

Leaving to enter the community of the Vincentian Sisters of Charity on February 2, 1940. Anna’s brothers John (left), Joseph (right), and Steve escorted her to the Vincentian Motherhouse that day

When she received the habit on August 18, 1940, she was also given her religious name, chosen by Sister Bernadette Fialko. Sister originally thought she had been given the name Therese Martin after St. Therese of the Child Jesus and she was very happy with that name. However, she had actually been given the religious name Teresa Margaret. Sister Modesta Dzuban, once Teresa Margaret’s second grade teacher, had brothers in the Carmelite order who were very devoted to St. Teresa Margaret. They helped young Sister Teresa Margaret learn about the saint she had been named for. Once learning about her patron, Sister loved her new name. 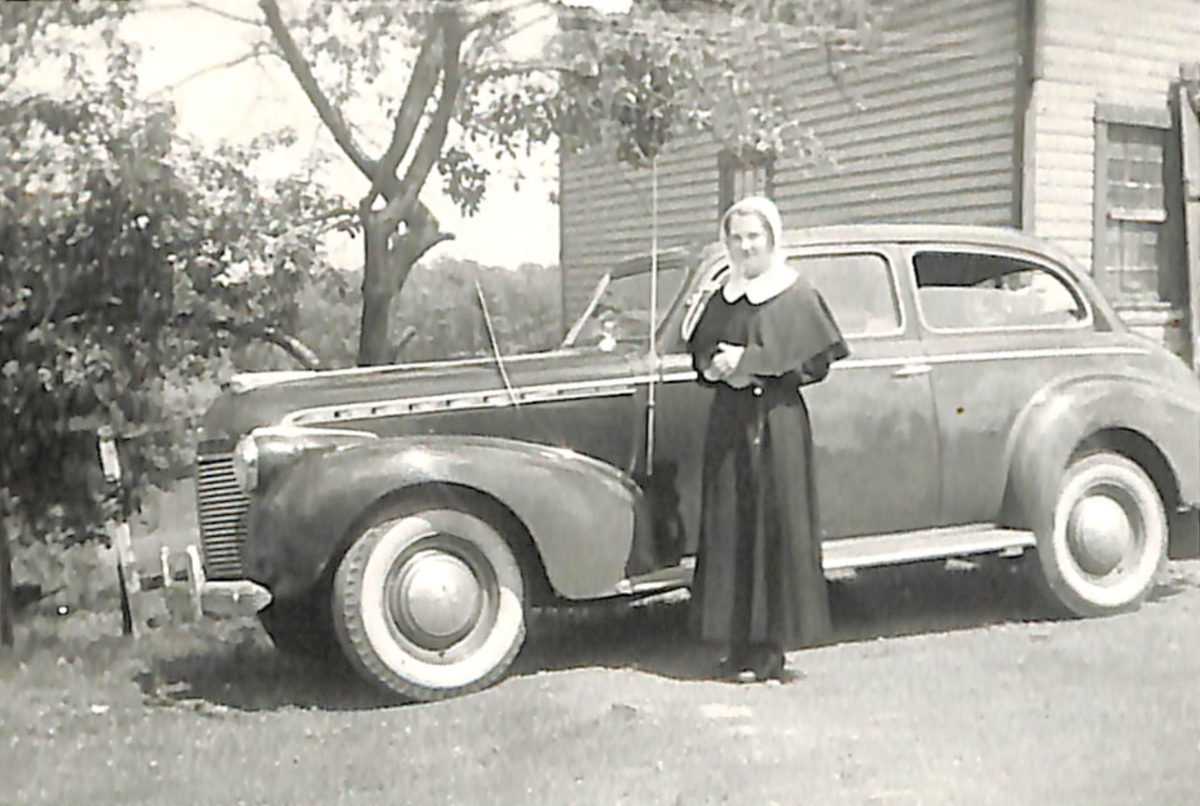 Teresa Margaret was very happy as a postulant and a novice. While life in the novitiate involved a lot of hard work, Sister remembers this period as a time of great peace and happiness. At the time, all of the novices were taking lessons to learn how to play the organ because there was a great need for organists. Coming from such a musical family, Sister Teresa Margaret was happy for the lessons and was even briefly sent to Cleveland, Ohio as a novice to substitute for Sister Frances Chalfa, the usual organist, who was ill.

On August 16, 1942, Sister Teresa Margaret made her first vows. Once she was professed, her public ministry began. She began teaching elementary children and pursuing a Bachelor of Education degree from Duquesne University. Her first mission was at Holy Trinity in McKeesport, PA where she taught as well as being apprenticed to Sister Prudentia Bornak to continue lessons on the organ. Sister remembers that her first mission was overwhelming. She felt that she belonged at the Motherhouse but she had promised obedience and trusted God to carry her through. Gradually teaching became easier. 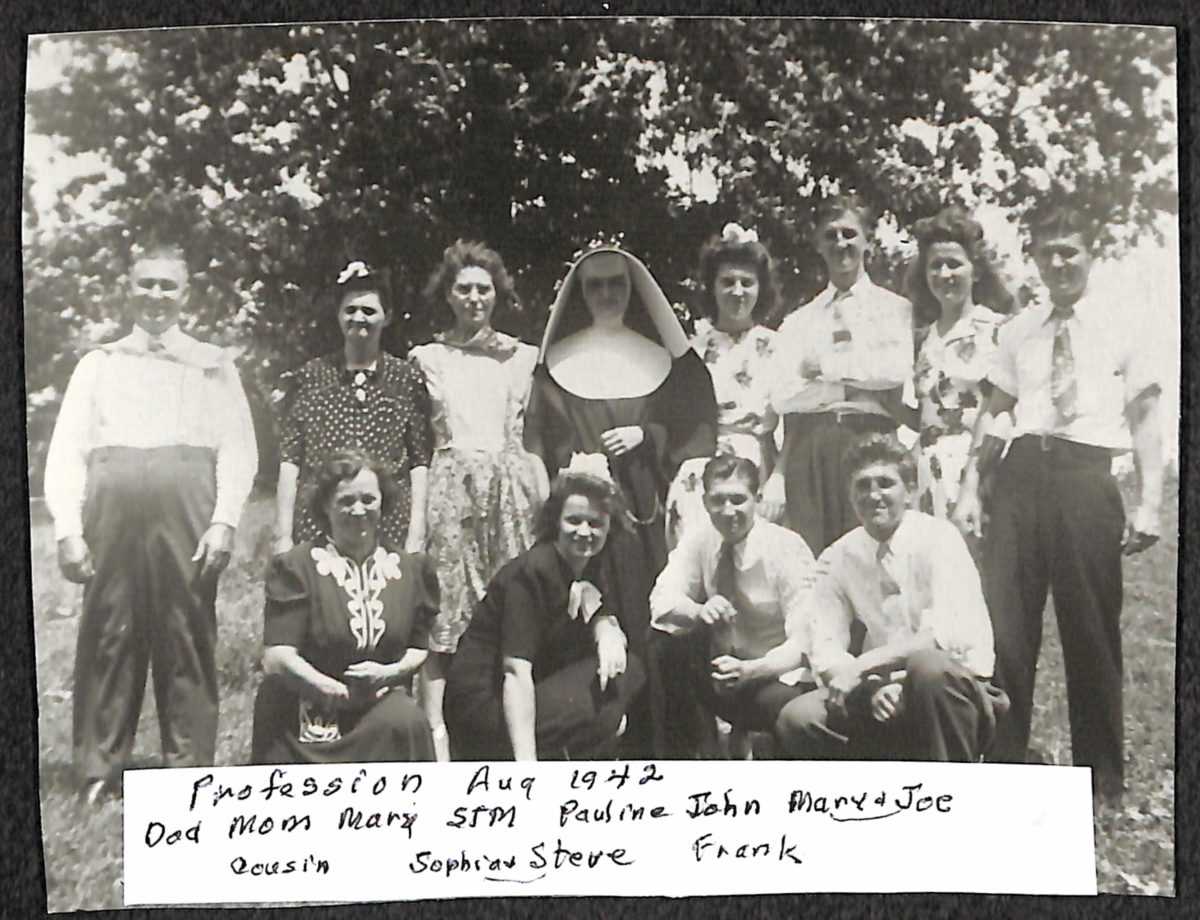 After ten years of living in the convent, Sister was allowed to visit her family. She was so excited to return home after so much time away. To her dismay, her family had moved to a new house in Uniontown. Teresa Margaret was so disappointed that she couldn’t visit the farm where she grew up. Of course, she was happy to be with her family, all of whom came to see her while she was visiting home. When they sat down to eat dinner together for the first time in ten years, her family members sat waiting. Finally, they asked her if she was ever going to get ready to eat. She had to explain to them that she was ready and that Sisters ate with their full headdress on!

While missioned at Holy Rosary in Republic, PA, she and her students flocked to the church one day to pray the rosary. At the time, there were construction workers there. While the children and the Sisters prayed, the construction workers sat on the steps at the front of the church. After they returned to their classroom, Father Henry J. Marcinek came to see them and he was very excited. He told them how powerful their prayer was; a construction worker who heard them all praying had spoken with Father afterwards and made the decision to return to God!

Before she retired from teaching, Sister taught children in thirteen different schools in the Dioceses of Pittsburgh, Greensburg, Altoona-Johnstown, and Saint Catherine in Ontario, Canada. Finally, after fifty years, Sister Teresa Margaret retired from her teaching ministry. In 1992 she left St. Agnes School in Huntingdon, PA and returned to Pittsburgh where she worked at the Vincentian Child Development Center. Sister greatly enjoyed working with the toddlers and preschool children. In 1995 the Childcare program moved from Emerentia Hall to a new building. All of the children were so helpful during the move and the new building was wonderfully suited to their needs.

In 2008, Sister Teresa Margaret left childcare to spend her time visiting and assisting with the Sisters in Lourdes Hall. She and Sister Cecilia Ann Fatula work together to help the Sisters in any way they can. One of their main tasks is sewing and altering garments for the Sisters to wear. She also helps with the community project of crocheting recycled plastic grocery bags into mats for the homeless.

Sister Teresa Margaret is grateful that she responded to Jesus’ call, “Come follow Me”. Though all of her immediate family members have already gone to heaven, she believes that God has work for her to do still. Sister desires to be of service to those in need and she thanks God for each new day and for giving her strength to help others. Prayer, liturgy, retreats, and companionship with her Sisters in community sustain her in religious life today.