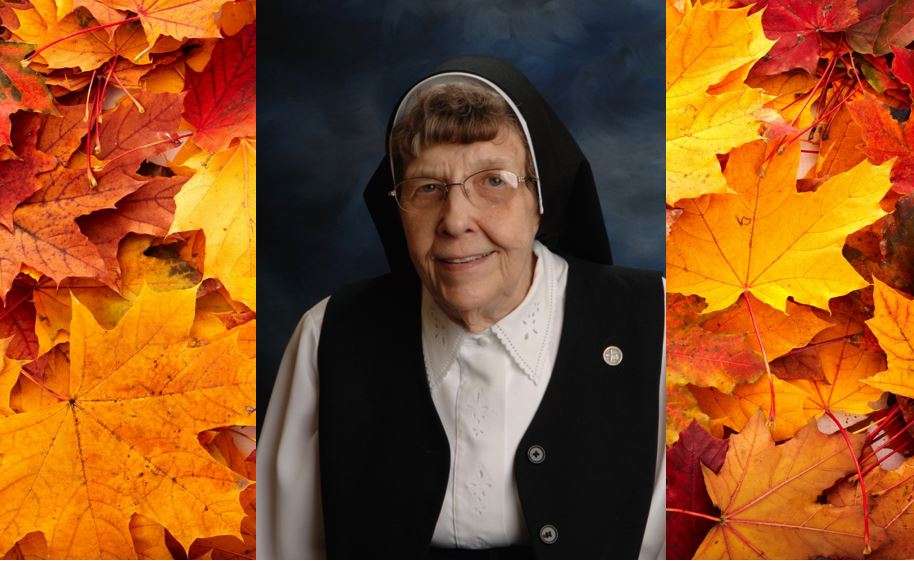 (The remarks of the interviewer are in italics. In this story, Sister is referred to by both her baptismal name ‘Evelyn Margaret’ and her religious name ‘Stephen’.)

In 1931, Mary (Palencar) Breznay was taking care of the church linens at St. Michael’s parish in Munhall, Pennsylvania. While she was working, Father M. C. Slatinsky said to her, “Mary, the next child you have should be called Evelyn”. Mary replied, “Father, I already have ten children and that’s enough!” July 6, 1932 marked the birth of Stephen and Mary Breznay’s eleventh child in Homestead, PA. Fourteen days later, on July 20th, she was baptized Evelyn Margaret.

Stephen Breznay was born in Slovakia and Mary in Hungary. Both were devout Catholics and they raised their children in the Catholic faith. Margaret, who went by her middle name, grew up the youngest of eleven children. Dorothy was still at home but Mary, Ann, Helen, and Agnes were grown and had left home to start their own families. Margaret’s brothers, Stephen (Steve), Joseph, Thomas, Regis, and John were all in the military; either the Navy or the Army. (Steve lied about his age so as to be accepted.) Everyone in the family got along well and took care of each other.

Margaret attended grade school for eight years at St. Michael, taught by the Vincentian Sisters of Charity. There, she earned the nickname “Breezy” which sounded similar to her last name and captured her wild and energetic spirit. After finishing the eighth grade, Margaret began attending Vincentian High School in Pittsburgh. At that time, the high school was a boarding school and Margaret enjoyed living there. During her freshman and sophomore years, whenever the Sisters asked if any of the students had an interest in a religious vocation, Margaret’s hand never went up. That changed in her junior year. Margaret’s older sister Mary had been in the VSC community for six years with the name Sister Fortunata. Mary/Sister Fortunata felt that God was calling her to a different life and left the community in 1925. She later married and had two children. When Margaret asked her mother if she might join the Vincentian Sisters of Charity her mother supported her vocation but cautioned her not to turn her back on God, “like Mary did”.

Margaret entered the VSC community on September 8, 1949 at the beginning of her senior year of high school. She spent the next year finishing high school as a postulant under postulant directress Sister Jerome Nosal. After graduating from Vincentian High School the following summer, Evelyn Margaret entered the novitiate on August 13, 1950. One of the three names she requested for her religious name was Stephen in honor of her father, and also of her brother who had left the Church. Upon entering the novitiate, Margaret was glad to receive the name Sister Mary Stephen. To her joy, her brother later returned to the Church.

Stephen enjoyed her time in the novitiate. Sister thinks that the community then had such a strong bond and she really loved that. Six women entered the community with her but three later withdrew before making vows. Novice mistress Sister Euphemia Cvengros said that each of the remaining three novices reminded her of one of the theological virtues. Sister Danielle Jankoviak was Hope, Sister Ann Horvat was Charity, and Sister Stephen was Faith. Since then, Sister Stephen has witnessed each of the three Sisters, including herself, demonstrate the virtue Sister Euphemia saw so early on.

It wasn’t long before Sister Stephen experienced the faith that Sister Euphemia saw. The year that Stephen made her first vows, her mother became very ill. She passed away on June 6th, only two months before Stephen was to make her first profession. Losing her mother was a difficult challenge for Sister Stephen and she knows that faith saw her through to making her vows on August 15, 1952.

Sister’s first mission was at Vincentian Home working as an aide. At that time there were eight or nine patients to a room in the long-term care facility. She remained there for nearly a year until she exchanged with another Sister and began working at the Bishop’s house in Pittsburgh as a housekeeper.

Sister Stephen received her bachelor’s degree in education from Duquesne University. In 1954, Stephen was assigned to her first teaching mission at St. Ursula School in Allison Park, PA. There she taught second grade and discovered her love for the teaching profession. Sister Stephen only stayed at St. Ursula for one year but that mission began a forty year teaching career spanning thirteen schools in Pennsylvania, Ohio, Missouri, and Alabama. Most of those forty years were spent teaching the first grade but Sister also taught second and third grades as well as CCD.

In addition to teaching, Sister Stephen served as the local coordinator at St. Dominic in Donora, PA for two years. She was responsible for all of the Sisters and the convent at St. Dominic. Stephen fulfilled this assignment for the community but she didn’t enjoy being a coordinator. She preferred to “do”, to act and teach rather than to organize everyone else’s schedules and responsibilities.

Sister Stephen was sent to teach at St. Mary School in Pierce City, Missouri in 1975. She arrived in Missouri via her first flight on an airplane. This is the only mission where Stephen ever felt truly homesick. As a result, she only stayed for one year. Sister did not want to get on a plane again so she asked her brother Joe to come get her and take her back to Pittsburgh. He drove all the way to Missouri so that Sister Stephen didn’t have to board another plane!

Sister really enjoyed teaching and was happy at most of the schools where she taught. Only once did she request a change of mission. When she was teaching at St. Sebastian in 1981, she found the children’s schedule to be too chaotic and unstable. There never seemed to be enough time to teach them what they needed to learn. Her request for a change in mission was granted and in August of 1982, Sister Stephen was sent back to Mother Mary Mission in Alabama where she had been missioned from 1958 to 1960.

During her last year of teaching, in 1993, at St. Mathias School in Youngstown, Ohio, Sister Stephen was presented with the Sister of the Year Award by the Knights of Columbus. This award was something different from the usual, “Teacher of the Year Award” and Sister felt that it spoke to her role as a witness to her faith. In June of 1993 Sister Stephen retired from teaching but quickly acquired other work. “They say, ‘you’re not retired, you’re rehired!’”. She returned to the Motherhouse in Pittsburgh to serve as a night nurse helping the Sisters in the Infirmary. 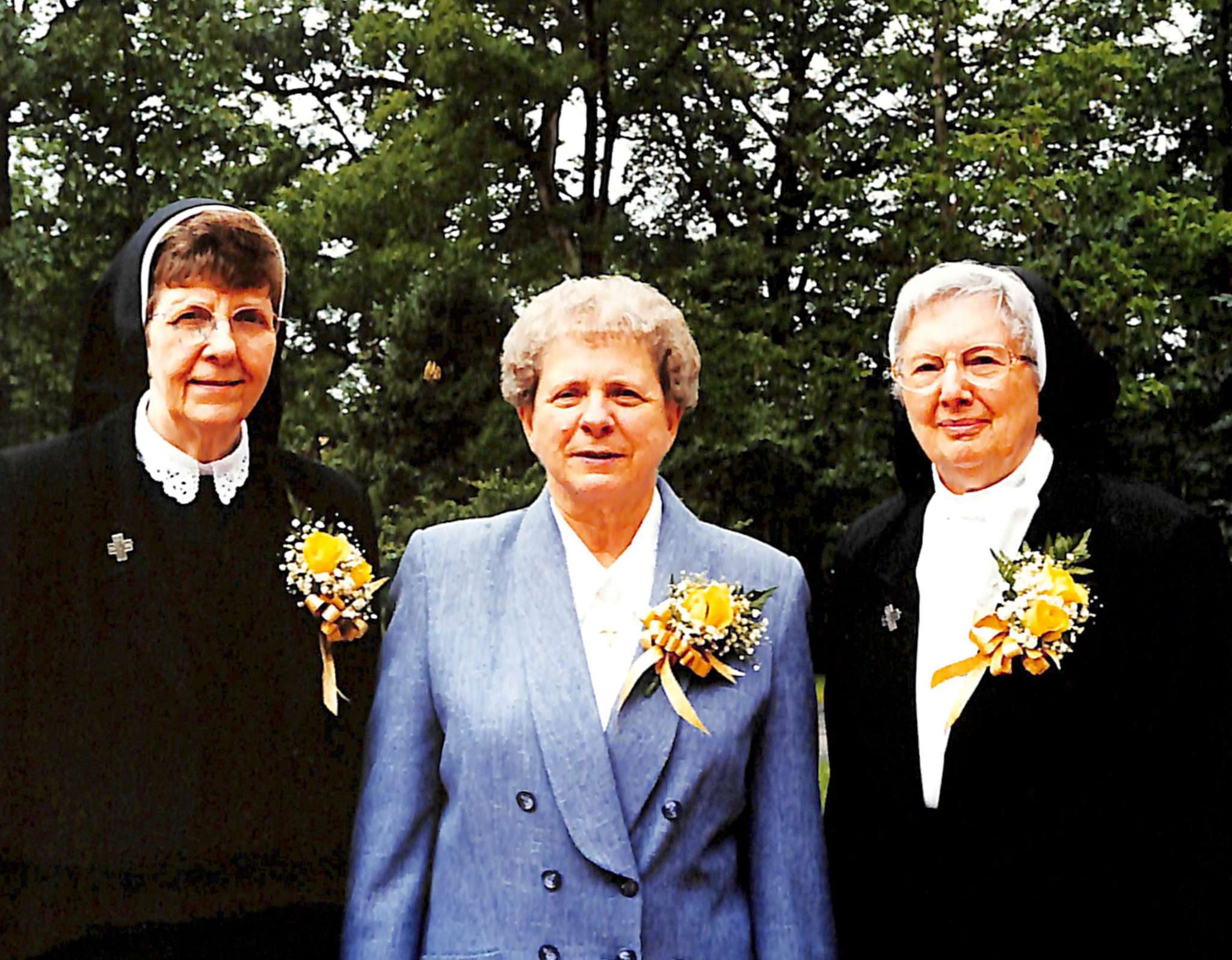 After three years as a night nurse, she was asked to work in the Vincentian Child Development Center as there was a need for a Child Care Worker. Sister worked full time at the Child Development Center for three years before switching to part time in 1999. In 2000, her friend Sister Adalbert Vandzura asked Sister Stephen to take her place managing the gift shop at the Motherhouse. Stephen hated to leave her job in childcare but was willing to do so to take over the management of the gift shop for her dear friend. Sister soon found that she enjoyed managing the gift shop as well. “My passion was always to help others.” Through managing the gift shop, Stephen ensured that toiletries and other notions were available to the Sisters at St. Louise who were physically incapable of going out by themselves. Many were very grateful that Sister Stephen was there for them in this way. During her time managing the gift shop, Stephen also accompanied Sisters to doctor appointments and was a caregiver for Sister Adalbert until her death in 2009. 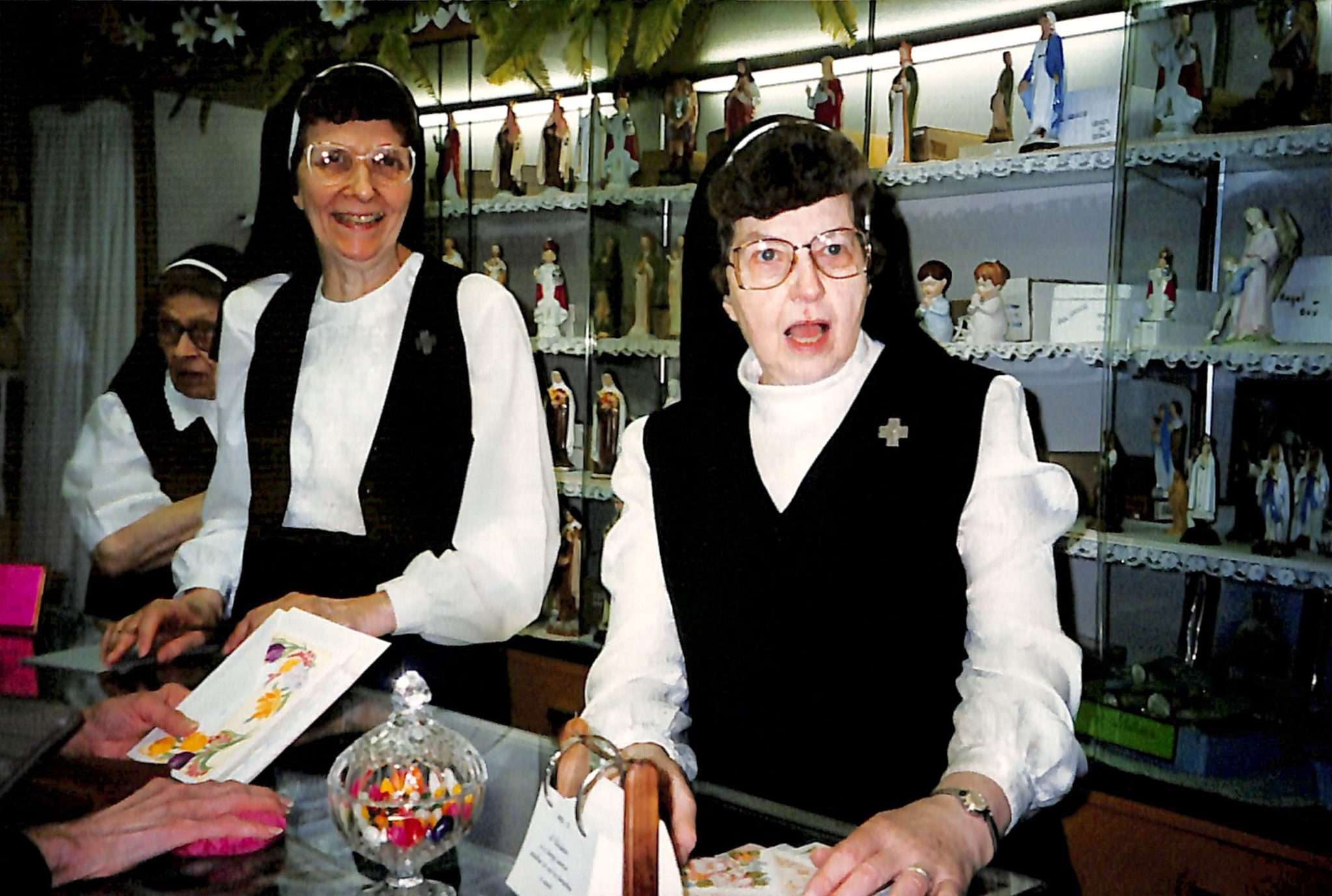 Through her years in community, Stephen has witnessed many changes. The decision made after Vatican II to permit Sisters to wear secular clothing was a difficult experience. Sister Stephen no longer wears the same habit that she received upon entering the community but a modified habit and veil. Though many of her Sisters have chosen to wear secular clothing, Sister Stephen still loves to wear her veil and habit. In 2008 the Vincentian Sisters of Charity merged with the Sisters of Charity of Nazareth. Sister Stephen viewed this change as a good opportunity and wholeheartedly supported the merger, although it was difficult. She keeps in touch through letters with her prayer partner and other Sisters at Nazareth.

Sister Stephen is very satisfied with her religious life and, when asked if she would make the same decision to enter the community, says she would do it all over again. “My life in this community has been a long and rewarding experience and I thank God for the spiritual journey with my Sisters and all the people of God in my life.”

(When I first met Sister Stephen, a month prior to this interview, I only spoke with her briefly. From that short meeting, however, I could see that she was an incredibly generous and thoughtful woman. While she insists that she has to practice listening [because she likes to talk], it is clear to me that she treats everyone who comes to her expressing a worry or a trouble with the utmost compassion. She continues to do everything she can to help those in need. In the face of her own health problems, Sister Stephen demonstrates an incredible optimism and faith in God and God’s plan.)