(The remarks of this interviewer are in italics.

Over and over I have heard Sister Evelyn say, “God has been so good to me.” She is usually speaking of the good health that has allowed her to be upon the earth for almost 104 years. But there are other blessings she mentions as you listen to her wonderful story – her loving family, her surprise call to Community, her enjoyment of her various missions, her delight in teaching in the primary grades and now her retirement days at Nazareth. “What is there not to thank God for?,” she asks. Those of us who know and have been inspired by Evelyn consider her long life and amazing spirit a great inspiration.

In the Archival Center at Nazareth there are various earlier interviews and articles written about Sister Evelyn, which are easily available. I shall touch on that material and add those years since her last Marie Menard interview in 2000.) 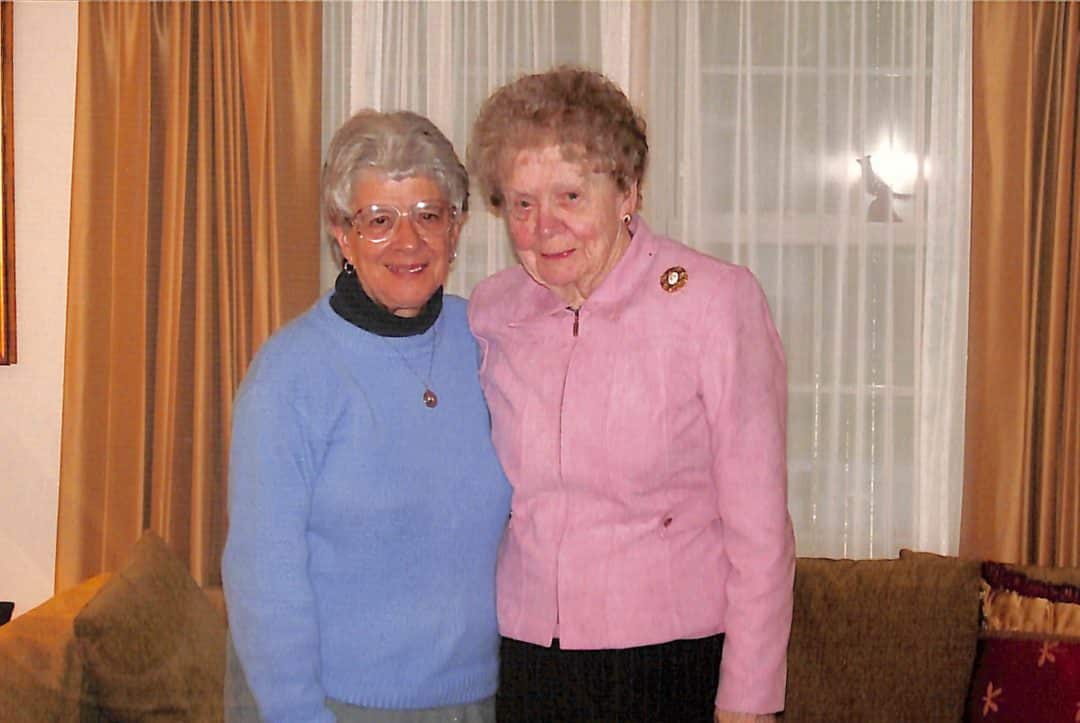 Evelyn, born in South Boston, Massachusetts, was the oldest of four children of Alice Barry and William Hurley. The second child, a son, died in infancy. They were a loving family and Evelyn grew up enjoying all the activities of her childhood and teen years. She attended Nazareth Grade and High School where she received a wonderful education from the Sisters of Charity of Nazareth. She also appreciated the family spirit of the school where teachers were greatly loved and respected

Influenced and surprised by Sister Helen Constance Walker’s urging, she decided to come to Nazareth, Kentucky to the SCN novitiate. Evelyn was only seventeen and had just two weeks to prepare for novitiate life. Evelyn smiles and remembers“ “My tailor made my blouses and skirts but didn’t finish them. When I got to Nazareth, I had to use safety pins because I didn’t have hooks and eye on my clothing.” Novitiate life was hard because she missed her loving family so much. Twice a year they did visit her at Nazareth. She hated to say goodbye to them. Evelyn shares, “To this day saying goodbye is still hard for me.”

She received the habit in March,1933 and the name Sister Alice William. She made first vows the next year and remained for one year at Nazareth in the Normal School, an SCN school for the training of teachers.

Her first mission was to teach the first and second grades at LaSalette Academy in Covington, KY. It was here that she and Sister Margaret David Higdon, a primary teacher in the nearby Cathedral School, were fortunate to be mentored by the well-known Sister Soteris Muennich. They were well prepared with the lessons they received as well as the experience of helping with the early and laborious hectographing of Sister Soterius’ book on phonics.

After four years in the primary grades at La Salette, Sister Evelyn was missioned to St. Agnes School in Louisville, KY. (This interviewer witnessed Evelyn speaking to a former student of sixty years ago, now a successful business man. She told him exactly where he sat in her first grade classroom. Amazing!)

Eight years later Evelyn was missioned to Clarksdale, Mississippi. This was a new mission, where heat and hospitality existed in abundance. An enjoyment was that both the school and convent were situated in the beautiful, old Southern Cutrer Home. As in her first missions, Evelyn had the primary grades. (This interviewer’s home was Clarksdale, MS and Sister Evelyn still asks about certain persons and places there.) 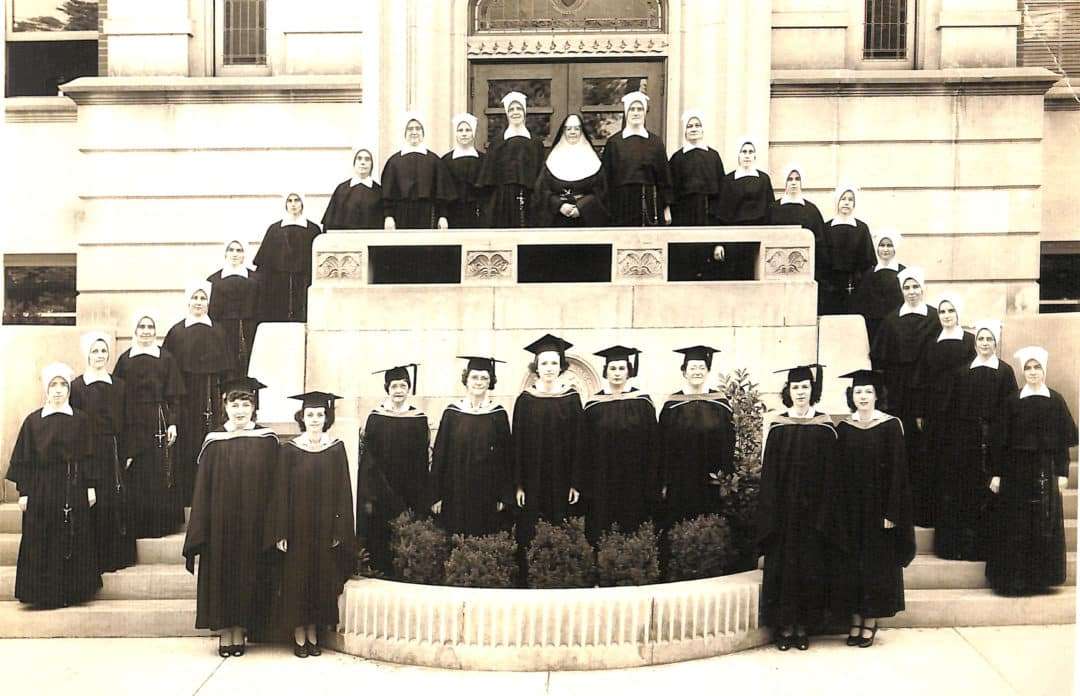 Summer school class at Nazareth College Louisville in 1943. Sister Evelyn (at the time Sister Alice William) is fifth from the left.

Summer times found Evelyn assisting at Camp Maria in Leonardtown, Maryland. The lengthy process of transferring furniture and other needed items from St. Mary Academy to the Camp cannot be forgotten. Wearing full habits and caps and taking care of the young campers was quite a ministry and task for Evelyn and other SCNs.

In 1950 Evelyn was missioned to South Boston, MA. This was her home parish and she would teach in the school, called Nazareth then St. Brigid, for forty-five years. Needless to say, with this long a stay in one place Evelyn taught the grandchildren and great grandchildren of earlier students. She says, “I thought that I should stop teaching when I got to be eighty.” In the late 60’s she returned to her baptismal name and has since often been called “Evie” by friends.

Sister Evelyn talking with a first grade student in 1994

After her teaching years in South Boston in 1995, Evelyn devoted herself to visiting the sick, attending the wakes and funerals of the families she had known so long. Many had families become close friends. During these years Evelyn dealt with an eye condition that has necessitated several corneal transplants. (To this day Evelyn deals with this problem but never have I heard any complaints.)

An SCN, also in the convent at St. Brigid whom Evelyn admired very much, was Sister Mary Lucina Sheehan. They were dear friends and had the blessing of visiting Ireland together. When Sister Mary Lucina grew very ill and had to go to Marian Manor in nearby Dorchester, MA,

Evelyn drove everyday to visit her. Driving was not a problem; parking was the challenge but she was there faithfully, nonetheless. When Sister Mary Lucina passed away, Evelyn was at her side.

The visits to Marian Manor, calls to the sick, attendance at wakes and funerals continued for Evelyn. Another ministry that she kept then and keeps now is to respond to every message, letter or gift with a beautifully written note, and maybe a phone call besides. Evelyn spent some of her hours in crocheting , usually for others. (Her work is elegant and encompasses baby items, as well as scarfs, hats, even two piece dresses and coats.)

Finally, in 2014 it was time for Evelyn, now ninety nine, to retire to Nazareth. She came with an open spirit and a grateful heart. Being assigned a room in Carrico Hall was a blessing, and she quickly adjusted to life at the Motherhouse. She shares, “Some ask me if it was difficult to become adjusted. My answer is an honest one, No, it hasn’t been at all.” Evelyn has the gift of being interested in everything and everybody, plus a good memory that allows her to pass news on to interested persons.

Evelyn celebrated her 100th birthday on March 7, 2015. With her family and friends present at a morning liturgy she was recognized for the woman of faith and strength she is. Evelyn was clad in a lovely two-piece dress which she had crocheted herself. She even accepted an invitation to speak a few words at the podium. As expected, she thanked God for the blessings of her life. She left us with a smile when she said , “Our Sisters from India tell me about a woman who lived to be 120, so be prepared about me.”

Now, it is four years later and Evelyn is approaching another birthday. She continues to keep in touch with her dear friends in Massachusetts by phone or letter. She manages to go to Nazareth Home in Louisville almost every week where she makes a list and visits as many SCNs as time allows. Evelyn was even seen recently pushing the wheelchair of an elderly gentleman at the Home who needed a ride to his room. She aslo stops by the room at Carrico Hall of any Sister who is sick or recovering. Very independent, she cares for her own needs and clothing. One exercise she practices that is a mind sharpener is that she finds a long word, having as many vowels as possible. From that word she thinks of as many small words as she can. (One night when I visited Evelyn, she shared , “I only have seventy five tonight. Sometimes I can think of 200.”

Evelyn has many of her friends and families who ask for prayer and she seriously promises to do so. As this interviewer can testify, Evelyn will ask each time she sees you about the person for whom you asked her to pray.)

As of March 25, 2019 ,Sister Evelyn Hurley has been an SCN for eighty-five years. It is our joy and blessing to claim her as a member of our dear Community. We join her in thanking and praising God for the many graces and blessings she has received.