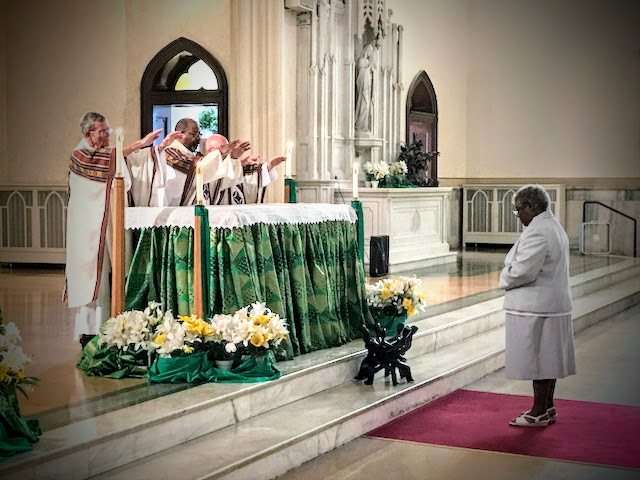 Congratulations to Dorothy Jackson, SCN, who celebrated her Golden Jubilee with a special Mass held August 12 at 4 p.m. at St. Martin de Porres Church in Louisville, Kentucky. The Mass included an SCN Jubilee Liturgy and a Renewal of Vows, followed by a Jubilee Dinner.

Sister Dorothy was born to Baptist parents in Birmingham, Alabama. Though both parents were Baptist, all six children were raised Catholic. Sister Dorothy says her mother took instructions to be sure she knew how to raise Dorothy and her five brothers in the Catholic faith. She and her siblings attended Catholic grade school and the two oldest attended Catholic high school.

After attending one year of college at Notre Dame College of Ohio, Sister Dorothy joined the Sisters of the Humility of Mary and remained with them from 1964-1976 when she transferred to the Sisters of Charity of Nazareth. In her 50 years as a woman religious, she has earned degrees in Social Science, in Urban Studies, and Human Resources. She has worked in local, county, state, and the federal government. Sister Dorothy has also been in ministry with the Archdiocese of Louisville and with St. Martin do Porres Catholic Church.

She said, “My education and my ministry experience has enabled me to use my gifts and talents in ways I never imagined and yet the Spirit continues to bless me with faith, strength of character and an ability to serve my people and the family of God. For all these gifts and blessings, I give thanks to my God.”