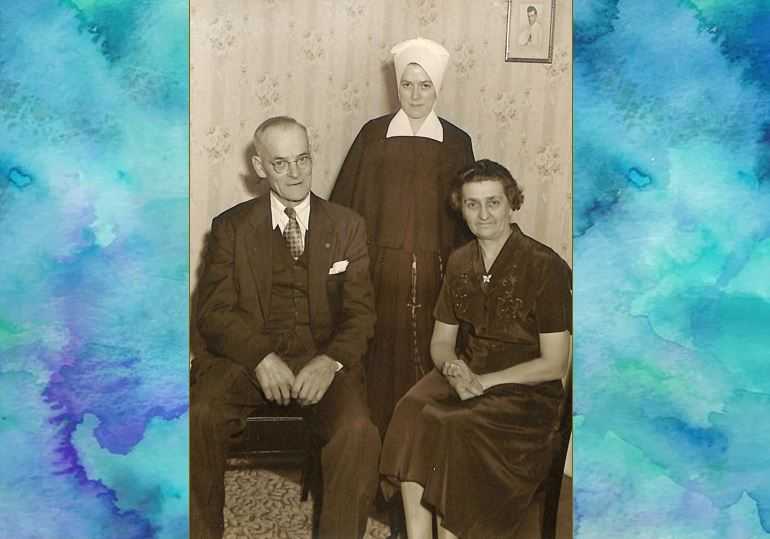 (Barbara MacDonald, SCN, formerly known by her religious name as Sister Anne Clement, is now ninety-four years old and living at Nazareth. Her quiet, gentle presence and ever-present smile is a gift to those who greet her. This is her story as told to Therese Arru, SCN.)

Barbara’s parents, Roderick and Irene Bon Vie MacDonald, were born in Canada and immigrated to the United States, settling in Massachusetts. An only child, Barbara remembers an uncle who lived with them and others coming into this country who stayed with them until they could get settled. Her father had been injured before he came to America. He never complained but now and then expressed the wish he could have played hockey. Although he was quiet and soft-spoken, listening to hockey games with gusto reaction was his consolation. He worked when he was able but Barbara’s mother worked regularly at a hospital in the area. Irene was a good homemaker as Barbara’s memory of homemade bread testifies. 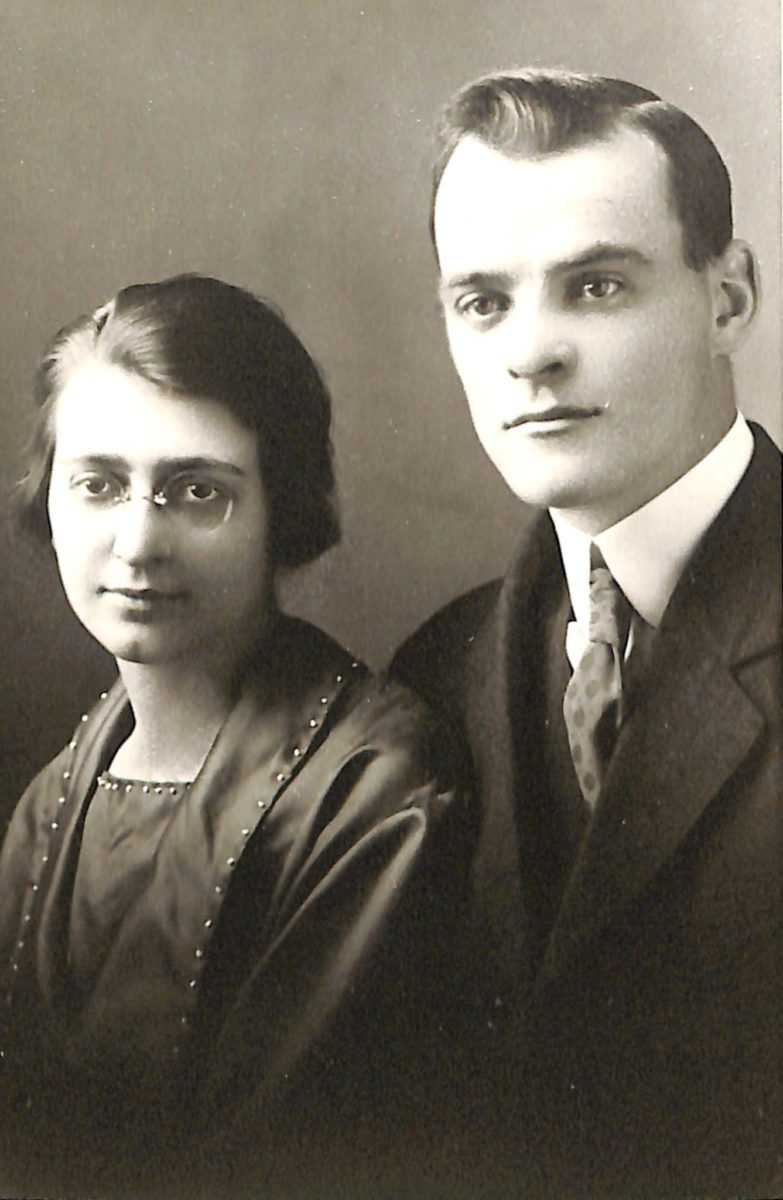 At eighteen Barbara entered the SCN Community from Hyde Park, MA. She was taught by SCNs in grade school and was impressed with the Sisters. She liked their way of keeping the class in order but not being severely strict. Barbara’s mother had gone to boarding school and often talked about the SCNS. Barbara was taught by the Notre Dame Sisters in high school but decided that Nazareth was her call. Sister Adeline Siebert kindly helped Barbara prepare to come to Nazareth.

After first vows in 1943 she began a long list of mission experiences in Ohio, Kentucky, Massachusetts and Virginia. Although she was supposed to stay at Nazareth for study, she was sent on a temporary mission to St. Vincent de Paul School in Mt. Vernon, Ohio. She remembers a difficult and memorable traveling experience there because of her unfamiliarity with trains. Her next mission was back in Kentucky at St. Mary Academy in Paducah, KY.

Barbara had taught the fifth and sixth grades at Mt. Vernon but later she was assigned various grades, – first, second, third as well as specialized reading classes. In both Readville, MA and Hyde Park, MA Barbara also served as Assistant Principal. As with all teachers, some students are not to be forgotten. One is a student who had serious seizures in Barbara’s class and demanded quick thinking and careful care.

At St. Peter School in Lexington, KY Barbara had the responsibility of preparing her second grade class for First Holy Communion. When the children said their prayers aloud in Church with an Eastern accent, it brought about many smiles.

(In 1963 Barbara was missioned to St. Anne School in Readville, MA. Being an only child, she appreciates that the SCN leadership allowed her to remain close to her parents during these years. Being at a nearby school allowed her to assist in her mother’s care.)

Barbara enjoyed all of her missions. One mission that is very memorable to her is teaching in a public school for almost ten years. It was 1972 and the school was the Emily A. Fifield School in Dorchester, MA. It is clear that this was a teaching experience dear to Barbara’s heart. The children were poor and a great benefit of this mission was that she would still be very near to her parents. 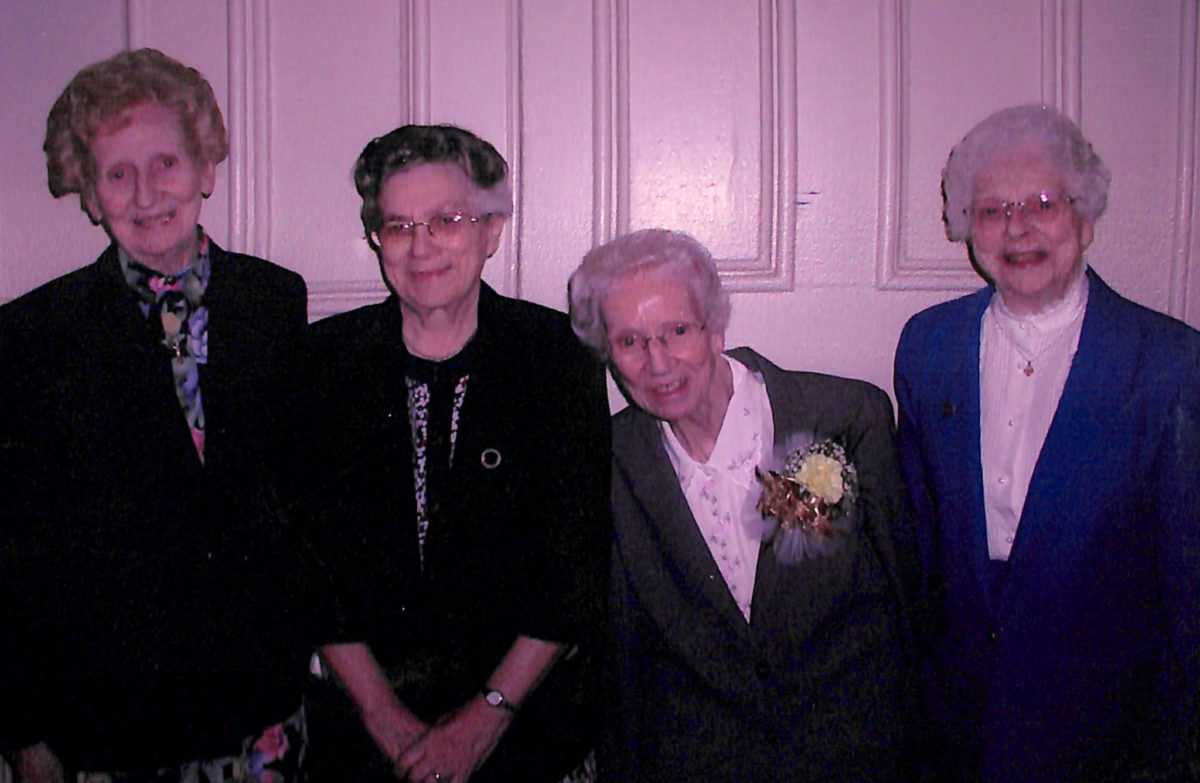 Barbara says even to this time she receives a pension and health insurance from her teaching in the public system. She recognized that some children had special reading problems and so she asked to get a reading certificate at Boston State College in order to address those children’s needs.

Barbara recalls, “Being the only one, I had to sell my parents’ house and, with some difficulty, find an apartment where I could move my mother. Later, I would live in the same apartment building.”

Roderick MacDonald, Barbara’s father, died in 1975 and Irene, her mother, died in 1985. For the next thirteen years Barbara lived with the Dullea SCNs, first Mary, then Julia and Phyllis. During this time Barbara taught at various schools in the Massachusetts area: Most Precious Blood in Hyde Park; Mary Hemingway and Emily A. Fifield Public Schools in Dorchester; St. Catherine of Siena in Norwood; Gate of Heaven in South Boston and Sacred Heart in Quincy.

In 1998 Barbara and the Dullea Sisters decided that it was time to move to Nazareth. Barbara was first a resident at David Hall on the Nazareth Campus and, after three years, moved to O’Connell Hall. In 2002 Barbara moved to the Motherhouse where she ministered in community services assisting with liturgical ministry. In 2009 she moved into Carrico Hall where she still lives, and where she is faithful to her all-important Apostolate of Prayer. Sister celebrated seventy-five years of vows in 2018.

(Featured image at top of page is Sister Barbara MacDonald with her parents on her first home visit after entering the SCN community.)