I, Thankamma Scaria, was born on April 23, 1949, to Cheriathu Scaria Menonparampil and Mariakutty Kalayathinal in Meenachil, Kerala. I am the fourth child of twelve children, seven brothers and five sisters. They are Mary Scaria, SCN; Kunj (Cheriath); Elsamma; Ann Scaria, SCN; George; Jose; Alexander; Thomas; Lilly; Issac; Mathew and Tessy. I was baptised as Anna on April 30, 1949 at St. Antony’s Church, Meenachil, Palai diocese in Kottayam District. All of us children, were very close to one another and we enjoyed being together. I loved taking care of the younger siblings and I knew how to keep them happy. I loved to hang around my younger brothers and sisters.

We had family prayer every day in the morning and evening. Our parents insisted that one of the children attend daily Mass. My father used to make us pray to become good ‘Kunju’ (little) missionaries. As a child I was very playful and did not bother to look around and see what needed to be done in the house. I was not very generous nor hard-working and in school, I studied just to get a pass mark. 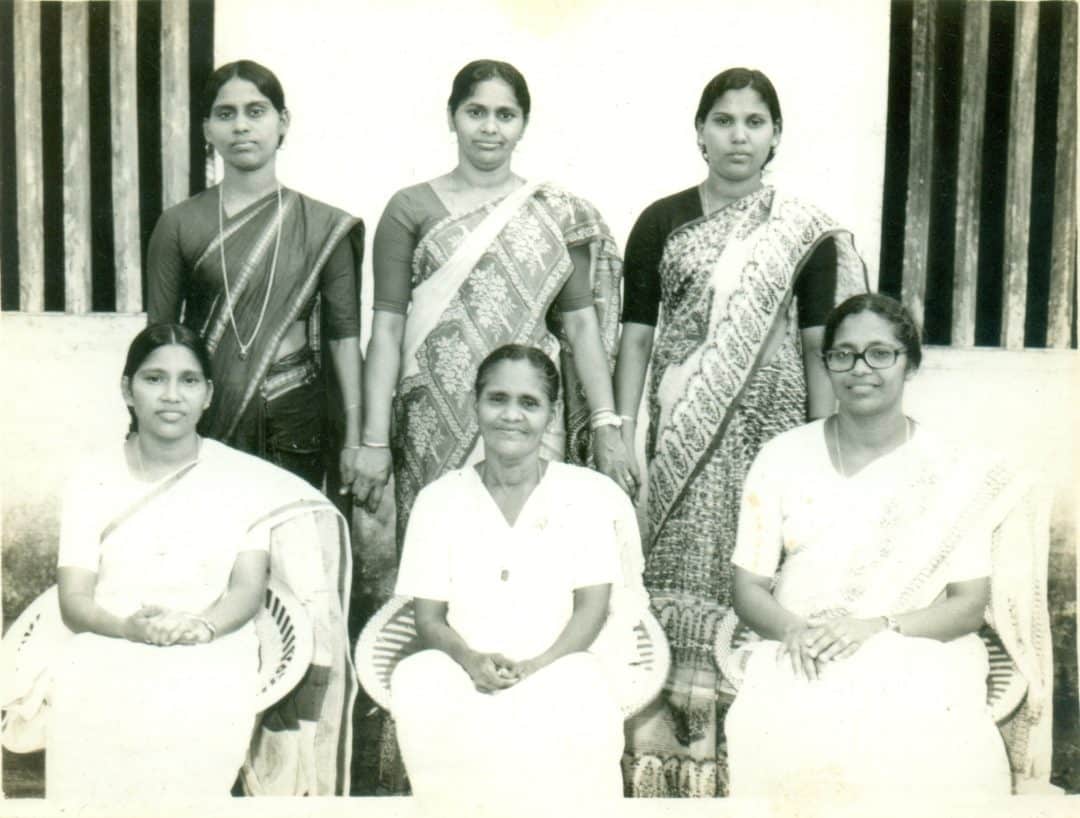 Sister Ann Scaria with her mother and four sisters at home

When I was in Class V, my eldest sister, Mary joined the Sisters of Charity of Nazareth (SCN) in 1959. After passing my SSLC, (Secondary School Leaving Certificate) I wanted to join a Congregation in Italy. The day before going to study Italian, I was a bit disturbed. My mother noticed my confusion and we had a conversation together and I decided not to go to Italy. That year I stayed home though my parents wanted me to continue my studies. My mother told me that she would take me to meet Teresa Rose Nabholz, SCN, in the following year. Since Mary was already in the convent, I went to meet the SCN Sisters who came to Palai, Kerala for recruiting.

I joined the SCNs in Mokama on June 10, 1966. Sister Mary Celeste (Gail) Collins was our candidate director for the first five months and Sister Teresita Theruvankunnel took over from her. We were sixteen candidates. With some of my companions I went to Ram Ratan Singh College, Mokama for the one-year pre-university studies.

I entered the postulancy on July 19, 1967. At the end of that year we went for a home visit and were given the option to return or not. I chose to return to Mokama and I entered the novitiate on July 19, 1968. Sister Patricia Mary Kelley was our novice director and we were nine in the group. We made our First Vows on the feast of St. Thomas the Apostle, July 3, 1970. 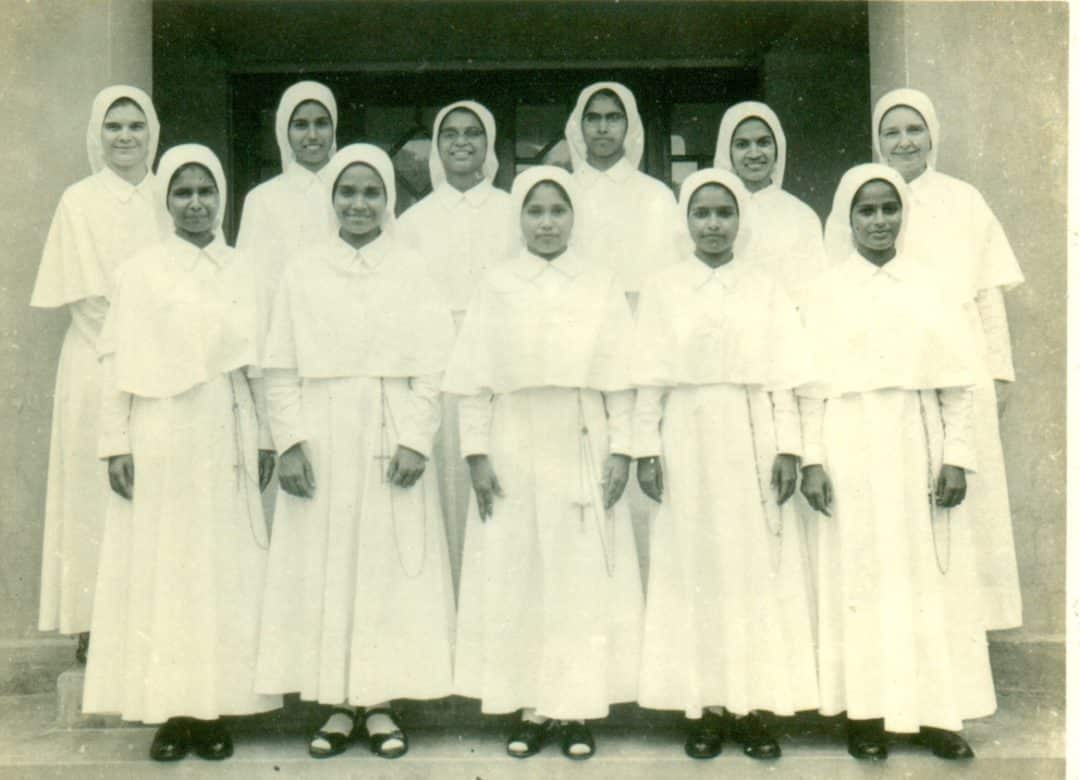 After the novitiate, I went to St. Xavier’s’ College, under Ranchi University for my Bachelor of Arts (BA) and graduated in 1973. During my stay in Ranchi I was very sick with asthma but with proper treatment I was able to continue my studies.

In 1971, my sister Mary and I went home for a reunion with all the members of my family. We had a group photo taken with all of us twelve children and our parents. The memory of my father’s untimely death on March 26, 1972 at the age of fifty-six saddens me even now. My mother was left all alone to care for her young children. 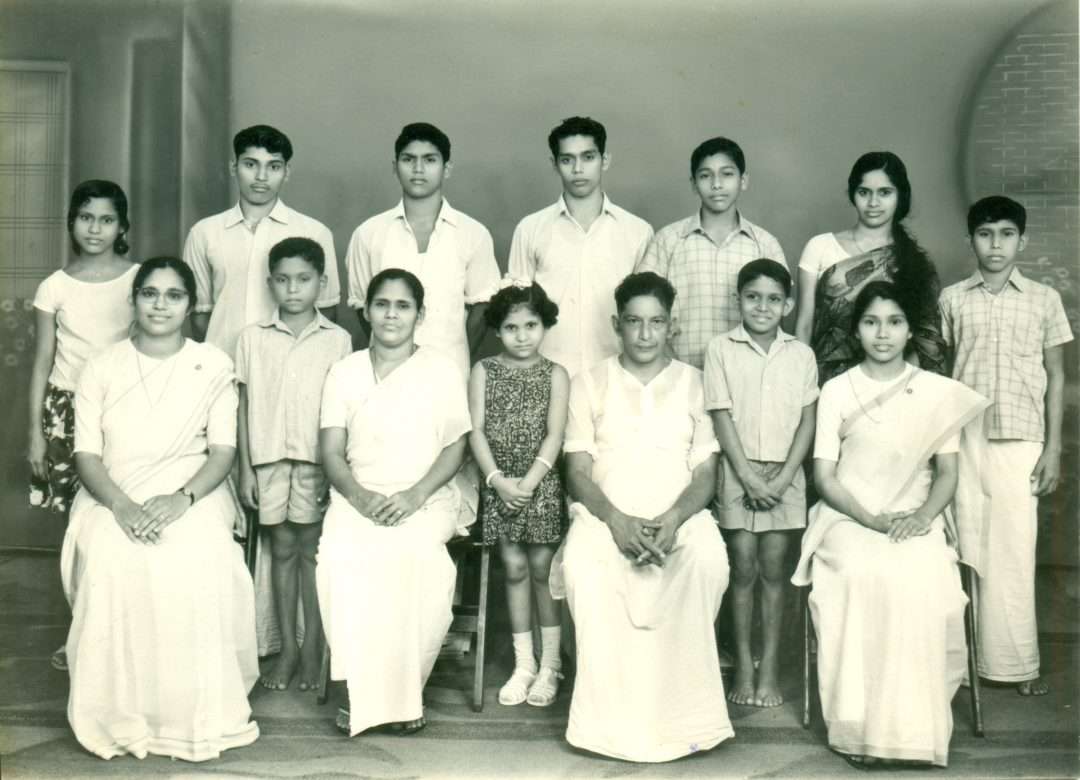 My first mission was to Chatra as a primary school teacher from 1973 to 1976. Initially, I found it difficult to teach Mathematics in Hindi for I was not fluent in the mathematical terms and numbers in Hindi. Once a month on Saturdays along with the teachers we visited the homes of the students in the villages. It helped us to know the background of the students and their difficulties which helped us to reach out to them with compassion and understanding. We were able to help some of the poor students financially.

In preparation for our final vows, we had a three-month renewal including a one-month retreat directed by Reverend Leo Cachet, SJ, at Nazareth Convent in Ranchi. Mary Madeline Abdelnour, SCN, also gave us some input in Ranchi. Six of us made our final vows on October 5, 1975 in Mokama. I returned to Chatra to continue my teaching ministry.

In January 1976, I was appointed headmistress of St. Xavier’s School, Mokama for a year. I enjoyed teaching English in the lower classes. I had a hard time to get some of the teachers to observe punctuality. By the time I left the school most of the teachers were coming to school on time. SCNs Sabina Mattappallil and Sarala Anithottathil and I worked together well in the school. During this year there was a devastating flood in Mokama and the flood waters entered the convent and school buildings. We waded through the water to put the important records on the top of the shelves in the wall as water had rushed into the school office.

I did my Bachelor of Education (B. Ed.) studies in Maharaja Satyaji Rao University, Baroda from 1977 to 1978. I taught in an all-boys school, St. Augustine’s, Vasai, Maharashtra for four years. I was the class teacher of Class IX and I had seven different subjects to teach during the first year. Since I did not know Marathi, the language of Maharashtra I found it difficult to communicate with the parents and others. Here I had the opportunity to connect with one of our former SCNs, Asha. We became close friends and I was happy to be of some support to her in her need. 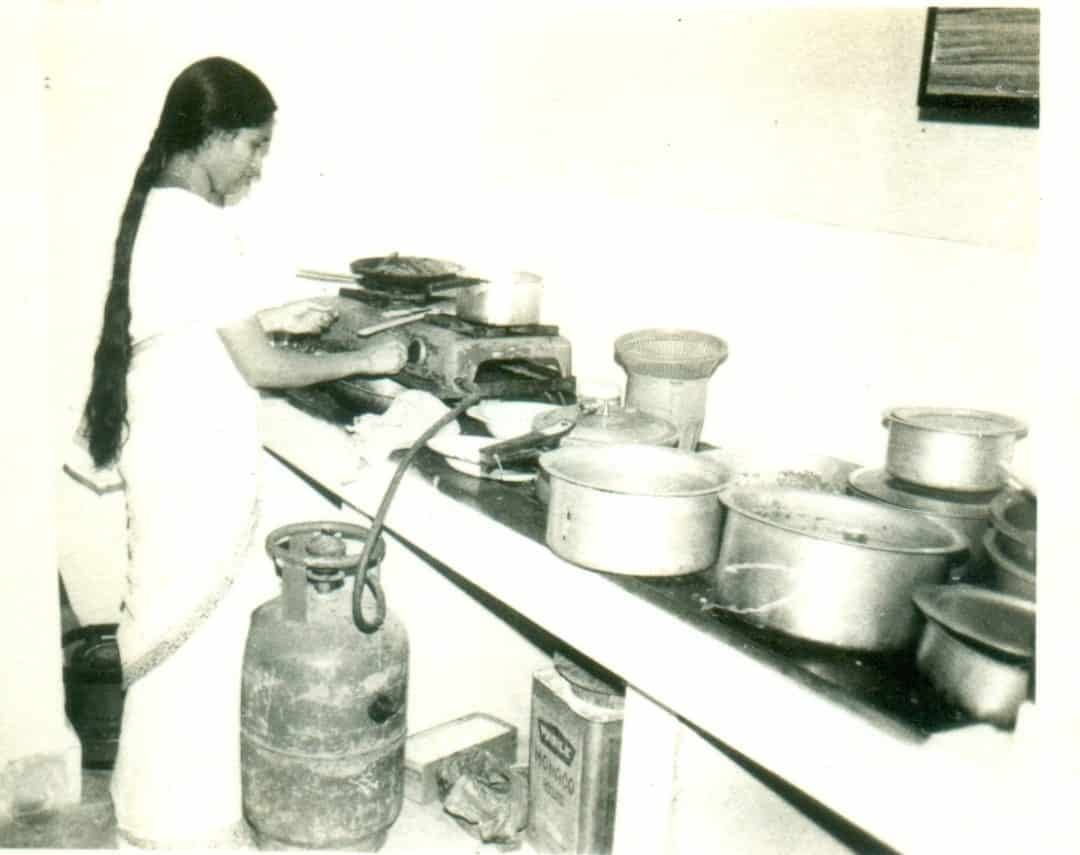 Sister Ann Scaria in the Sisters’ house in Vasai

My next assignment was to Nazareth Academy, Gaya, as a teacher from June 1982 to December 1986. I started as the class teacher of Class VII and I continued with them up to Class X. I had such an influence on those students that they would do anything that I requested of them. Some of them still keep up their contact with me.

I was appointed headmistress of Pushpa Vidyalaya, Biharsharif, (parish owned school) from January 1987 till July 1990. Besides being headmistress I had all kinds of duties such as collecting fees, serving as the secretary, etc. and had to teach four English classes. I enjoyed teaching the lower classes very much.

Coming back to Nazareth Academy, Gaya I served as vice-principal from July 1990 to May 1992. I had good rapport with the principal and the teachers. I was the primary department supervisor and I also enjoyed teaching Moral Science in higher classes. Life in the community was a joyful experience.

From June 1992 to 1994 I was back in St. Augustine’s School in Vasai as a teacher. During this time I found it hard to manage the boys, yet I taught them well and, gradually, they got used to me. 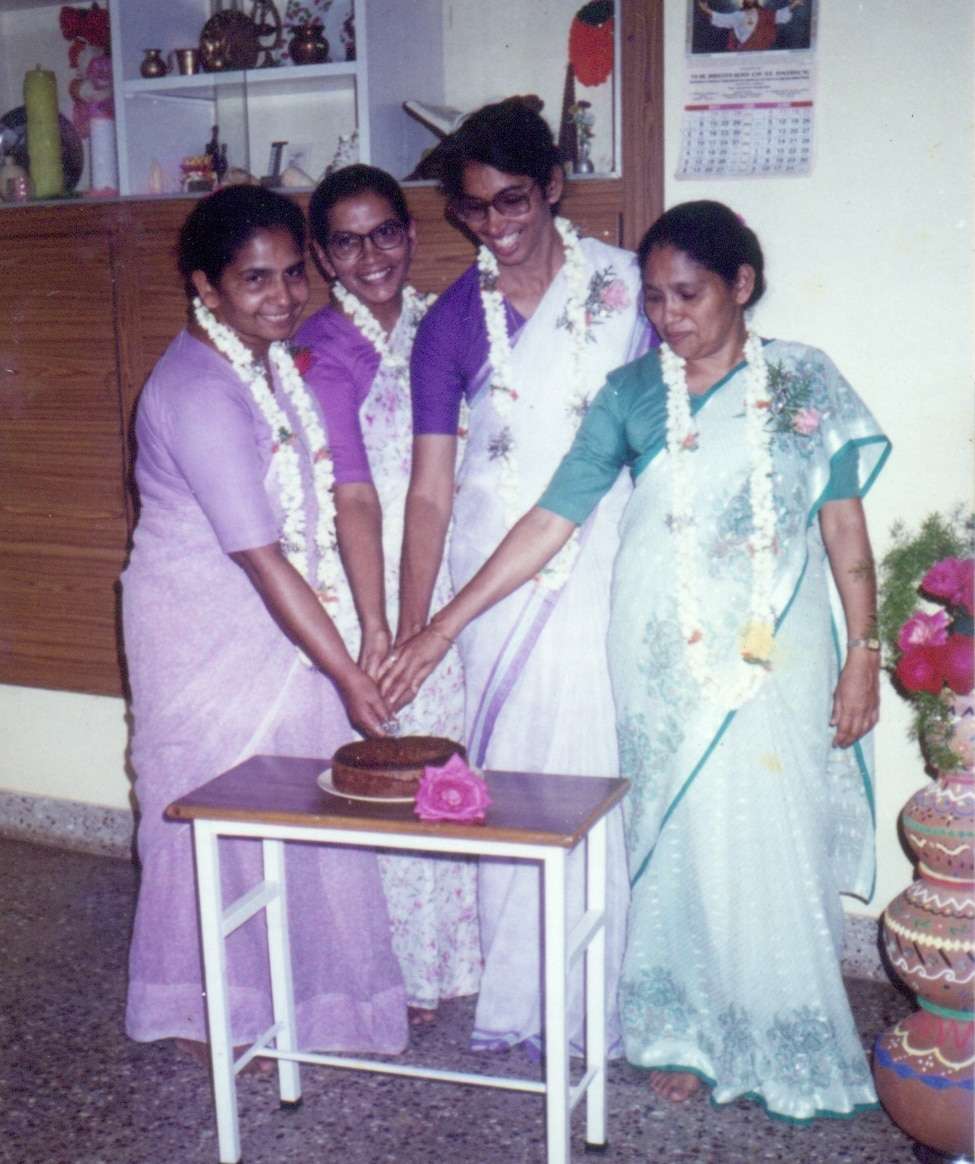 I went back to Chatra again in June 1999 and taught English in the high school till May 2004. Once when the principal was out of station, a Class VII student ran away during the school hours. A group of youth demanded that we produce the boy and I had to deal with them by myself. The boy had left the school due to some family problem and the school had to bear the brunt of it.

While in Chatra I went to Bangalore for a three-month silver jubilee preparation. Besides our group, many others also joined the renewal program organised by Teresa Rose Nabholz, SCN. Our first silver jubilee celebration was in our SCN house in Madiwala, Bangalore followed by one at my home. I had a big celebration in local community in Chatra and finally in Mokama, by the province.

From July 2004 to May 2010 I had the joy of teaching at Gyan Deep Vidyalaya, Jamshedpur. Besides teaching English from Classes VII to X, I also had the charge of selling books and other school supplies to the students. We took time to visit the families of students after school hours. We enjoyed the various religious gatherings of Jamshedpur diocese. The Sunday liturgy was in our school hall and we gladly took care of that, too.

My next assignment was to St. John De Britto High School, Gomoh, in July 2004. Until May 2010 I enjoyed teaching the children of the leprosy patients there. I also taught special classes in the hostel after school hours for the girl-students in need of extra tutoring. Many of them did well in their studies and are well-settled in life now.

As I was asked to discern about my appointment to the school in Anakkampoil, Kerala in May-June 2010, word came from my provincial asking me to be at Navjyoti School, Dharan, East Nepal, to teach English in the high school. As I did not have the opportunity to learn Nepali, the language of the people, I found it difficult to converse with the parents and others. As always, teaching children anywhere is a real treat for me! 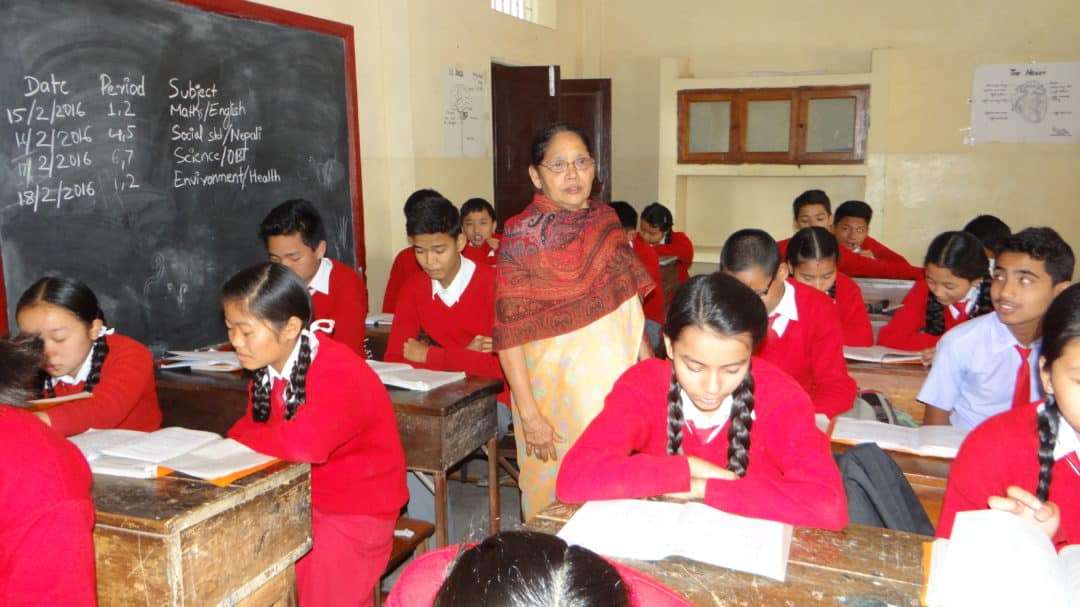 Sister Ann Scaria in the classroom in Dharan

I have changed and grown over the years especially with regard to household work and taking up other responsibilities. I enjoy working in the garden, taking care of the domestic animals, helping the cook in the house, etc. I began to experiment in cooking and I am surprised to see the various dishes I can make which the Sisters in the community enjoy.

The periodic attacks of asthma have been my greatest challenge in life. However, my provincials and local superiors have always supported me and helped me to cope with it. Ann Bernadette Ormond, SCN, who was very loving and compassionate, was my inspiration. Margaret Rodericks, SCN, was also extremely good to me. I feel I am well-loved and cared for by my community. Despite my regular asthmatic attacks, I am able to do a day’s work well. My illness has made me appreciate my community all the more. Daily Mass, personal and community prayer and devotion to Mother Mary are very important to me.

I believe that it is my positive attitude that makes all the difference in my life. I am a unifying factor wherever I have been in community. I do not have many accomplishments to boast about but my strength is in who I am. However sick I am, I enjoy teaching. Being with the children in the classroom energizes me. I am a compassionate person and I enjoy the life of giving and sharing. I thank God for the goodness and kindness I have experienced in my life in the Congregation. 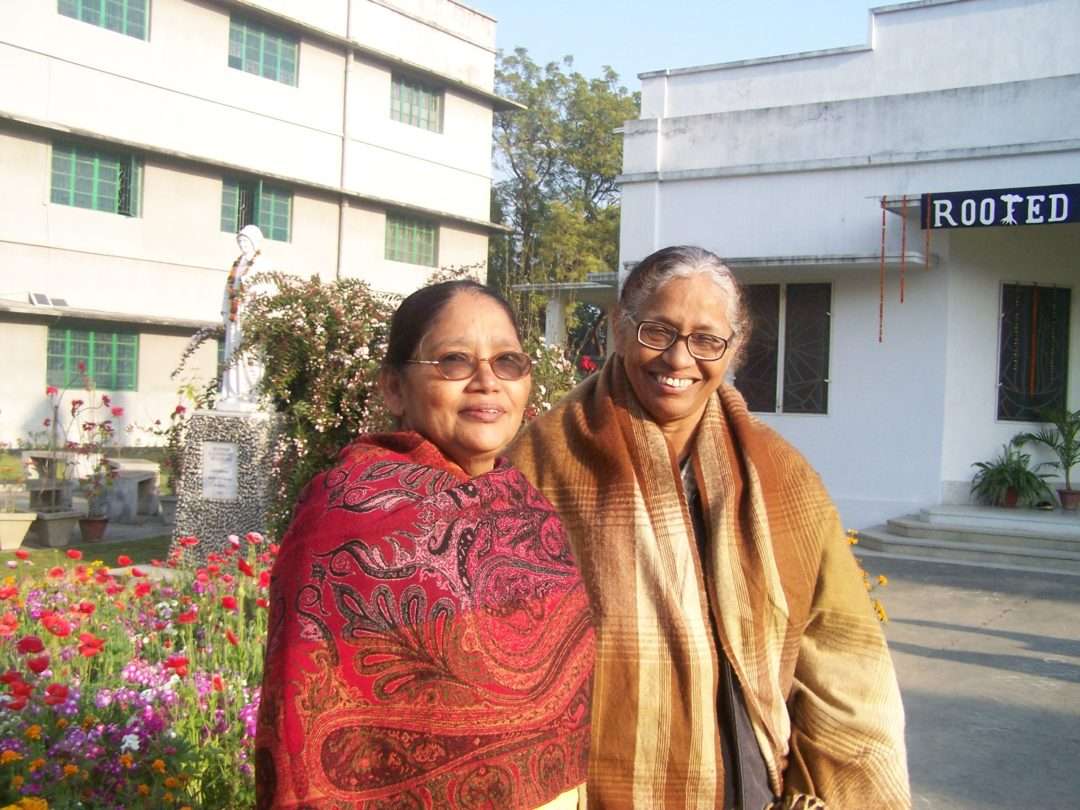 I have had very positive experiences in community and mission. I have experienced our Sisters as loving, forgiving and accepting of one another. I have enjoyed living with people of different cultures and backgrounds. Over the years, I have imbibed the spirit of Bishop David, our founder and Mother Catherine Spalding, our co-founder. I appreciate the characteristic virtues of simplicity, charity and hospitality of our Congregation. I am proud of the uniqueness of SCNs and our life of freedom with responsibility. I am grateful to God for our Congregation. May God be glorified in all our ministries!

As a religious Sister, I have always brought life to others wherever I have been in mission. As a teacher and mentor, I have touched many students to imbibe good moral values in making the right choices in their lives. Being available and people-friendly help others to come close to us to establish the reign of God!