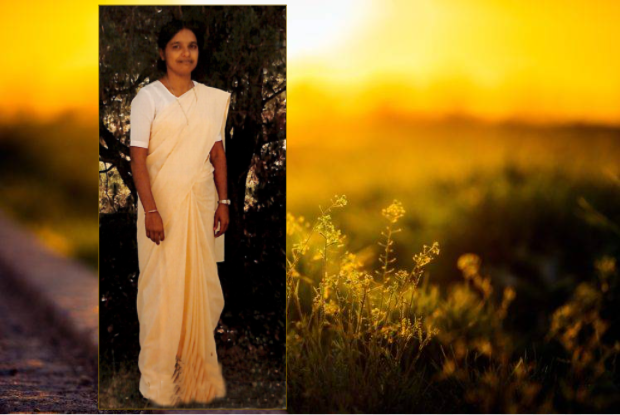 One who Abides in God’s Love

Love is for sharing, and it did not take away the pain, but in this suffering there is joy. This is what Sunanda always believed and she found her joy in being poor with the poor till her very end. She laid down her life in radical ministry for the poor and the suffering by providing medical care and education, especially for the rural, illiterate women and children. She was indeed a woman ahead of our time in that she lived the SCN Mission statement way before it was articulated and written down. Sunanda was a gift of gentleness and abiding, healing presence.

As the tenth baby among the eleven children of her loving parents, Mathai and Mariam Urumpil, Mary O. Mathew, (Sunanda Urumpil, SCN), was born on July 14, 1947, in Kottayam District, Kerala State. On the seventh day, the baby girl was baptised at Thodanal parish and named Mary. She was affectionate and let others know how much she cared for them. The chronological order of the seven boys and four girls of Mary’s siblings: Mathai, Annamma, Sebastian, Joseph, Chacko, CMI, Thomas, Chinnamma, (Joel, SCN), Mary, Philo. Two other siblings had died very young. Only Sebastian, Thomas, Joel and Philo are living. They were an ordinary peasant family. When Mary’s mother was five years old, her parents had passed away leaving behind her three-year-old sister. Their grandmother brought them up. Mary’s father was put out of his home by his elder brother. He worked near Mary’s mother’s place. Later, he married Mary’s mother and settled in her home since she had no brothers. He even took the family name of her mother. He was simple and devoted to the family, especially to her mother. She was sociable and a friend to the poor, and she was popular among the neighbours. All their children attended school.

After passing SSLC, equivalent of high school, from Little Flower Girl’s High School in Kanjiramattam in 1965, Mary decided to join the convent in Mokama where her own elder sister, Chinnamma, (Joel Urumpil, SCN) was studying for nursing. On June 10, 1966, she joined the Sisters as a candidate and did her intermediate studies in Arts from Ram Ratan College, Mokama, affiliated to Magadh University, Gaya. Mary became a postulant on September 8, 1967. On July 19, 1968, Ann Scaria Menonparampil, Jean Kulangara, Teresa Kotturan, Vinita Kumplankel, and Mary became novices. Sister Patricia Mary Kelley was their formation director. In becoming a novice, Mary took the name Sunanda, which means joy and happiness; she was true to it till her last breath. She made her First Vows on July 3, 1970, and Final Vows on June 13, 1976. 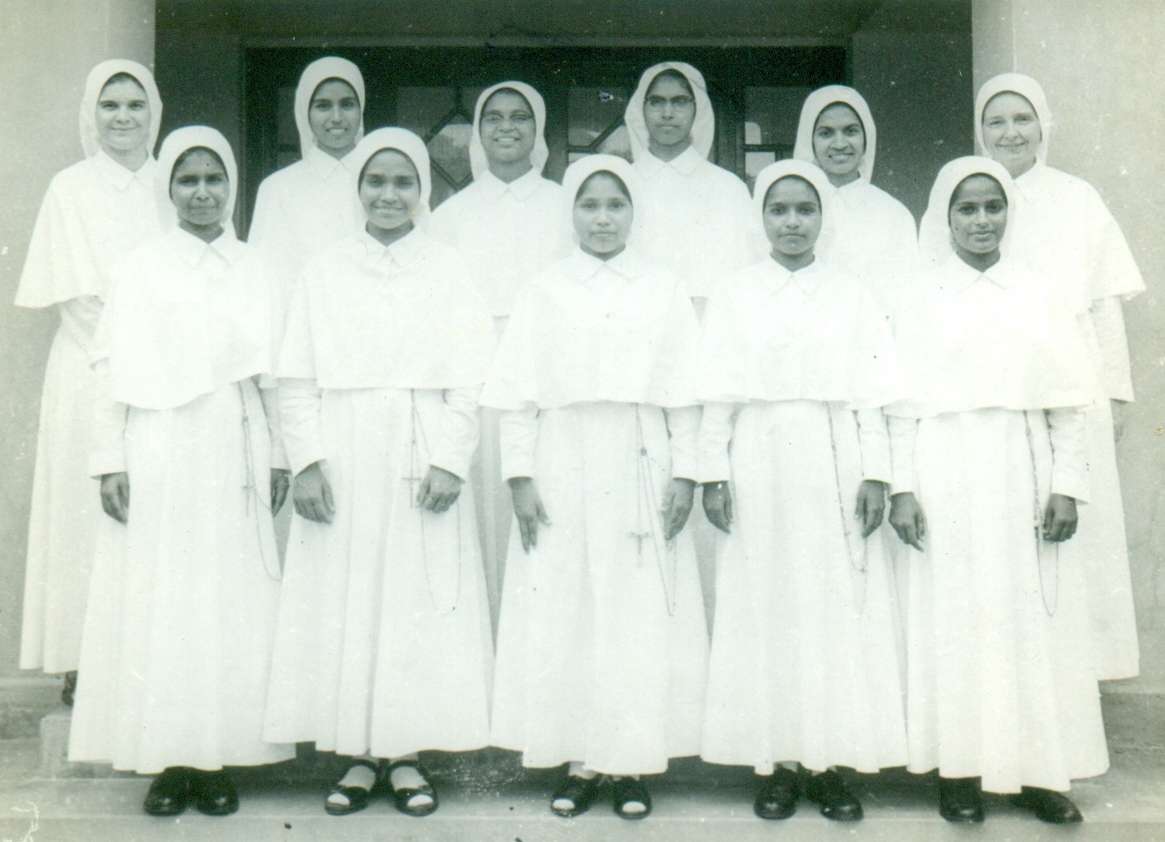 Soon after vows, Sunanda completed her nursing studies from Nazareth Hospital, Mokama, and continued to work in the hospital as an intern till she went to Community Health Centre, Bakhtiarpur, in 1978. After three years in Bakhtiarpur, she got a diploma in Tutor from Rajkumari Amrit Kaur College of Nursing, New Delhi. She returned to Nazareth Hospital as one of the ward supervisors in July 1982, for nine months. Her desire to serve the poor was actualized when she was missioned at Nazareth Nivas in Lupungutu, Chaibasa in March 1983. There, she had ample opportunities to give basic medical care and to educate the illiterate women in nutrition, hygiene and safe delivery. By her timely interventions, whether day or night, she not only saved many lives during difficult child births, but also persons affected by the dreadful, cerebral malaria. Through the unpaved mountain roads, she transported patients to the nearest government hospital in Chaibasa or to the mission hospital in Chakradharpur for treatment. 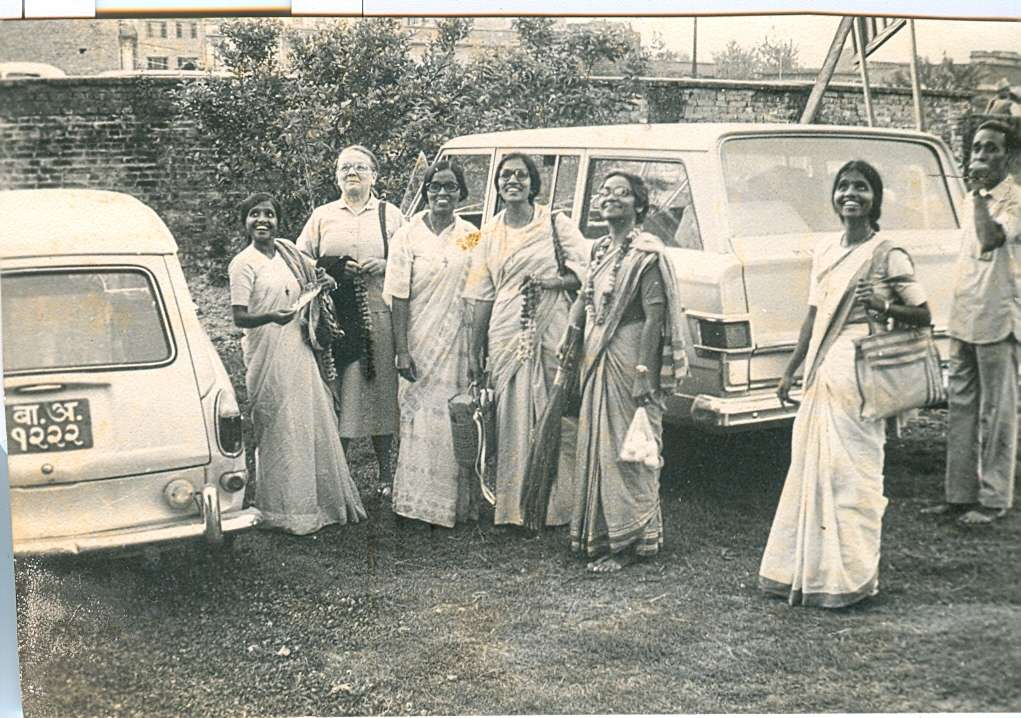 Sister Sunanda accompanies the pioneers to Nepal in April 1979

From 1985 to 1988, Sunanda served in the labour ward as supervisor at Nazareth Hospital in Mokama where she assisted women in child birth. She helped to train nursing students in their studies. She then returned to Community Health Centre, Bakhtiarpur, for a year. During busy months she worked round the clock with the crunch of trained staff.

Sunanda served the people of Kutuderi/Sale. She served as the health coordinator of the Diocese of Daltonganj and reached out to the entire diocese by training health workers and giving health education to the rural Tribal people from January 1989, till she died on July 27, 1991. Sister Clementia Xalxo, SCN, from Kutuderi, shared how Sunanda cared for the youth and the sick by going out of her way and also helped Brijilius Toppo from Karamtoli village who was studying at St. Michael School, Sale. Brijilius had a tumour on his neck which kept growing. Gradually, he was not able to walk straight. His family was poor and could not afford any medical care. Sunanda made all the arrangements for him to get treatment and accompanied him to All India Institute of Medical Science, Delhi. After the death of Sunanda, when Clementia (a second year novice) visited Kutuderi village, Brijilius was still inconsolable as he shared how Sister Sunanda helped him to get well. Her Sisters in community used to say about her that, “Sunanda will die for her patients.” Very soon that became a reality. 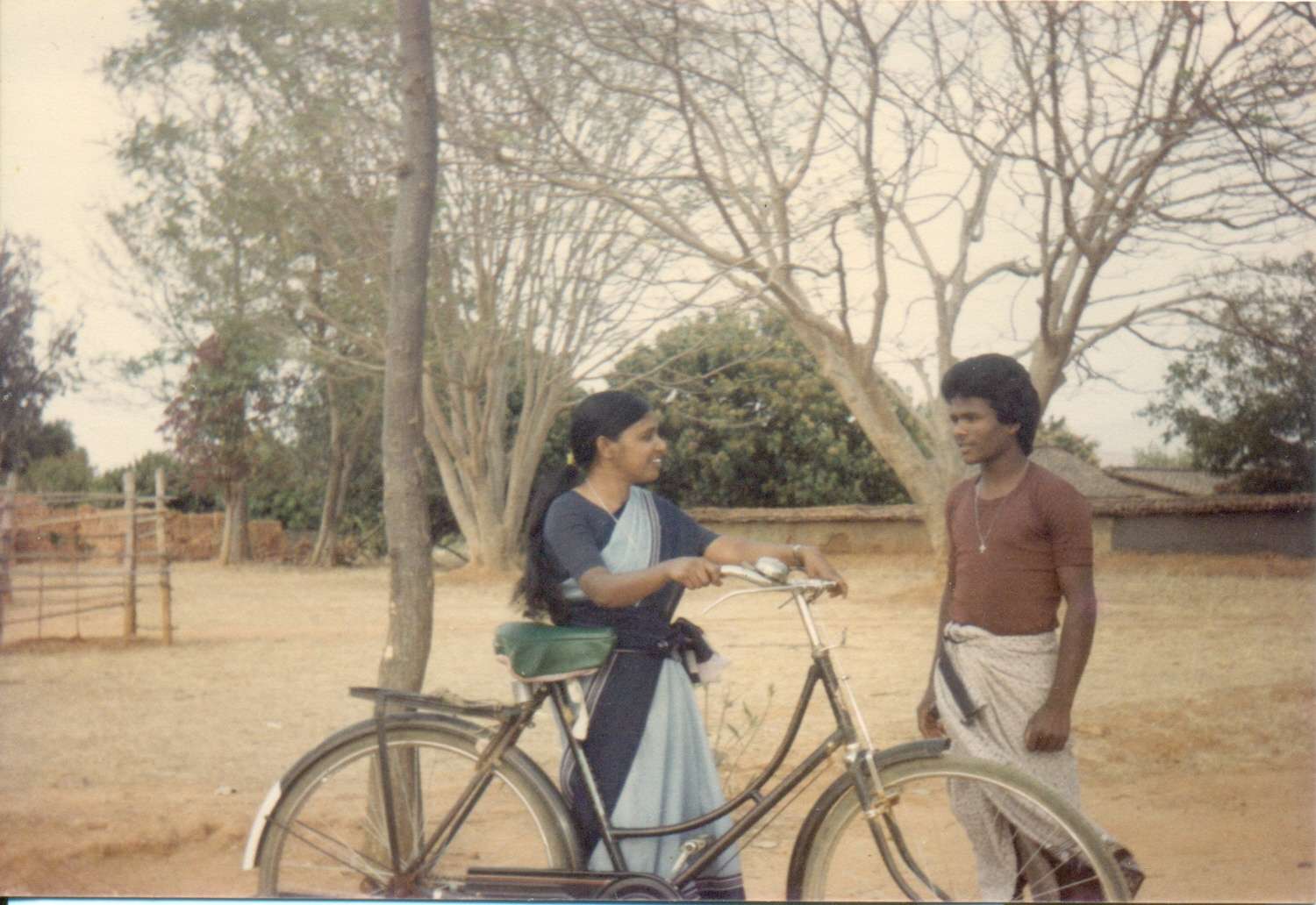 Sister Sunanda on a medical call in Sale

It was well known in Community that Sister Sabina Mattappallil, SCN and Sunanda were good friends. Sister Sabina shared that, “Sunanda loved people unconditionally and she was deeply spiritual and people oriented. She loved people to the fullest whether they are her friends or patients whom she cared for.”

As a nurse, Sunanda brought babies into the light of day and prepared many persons for entrance into eternal light during her short span of life. She worked very faithfully in public health education, and in serving the sick who came to her for understanding, healing and support to continue their journey. 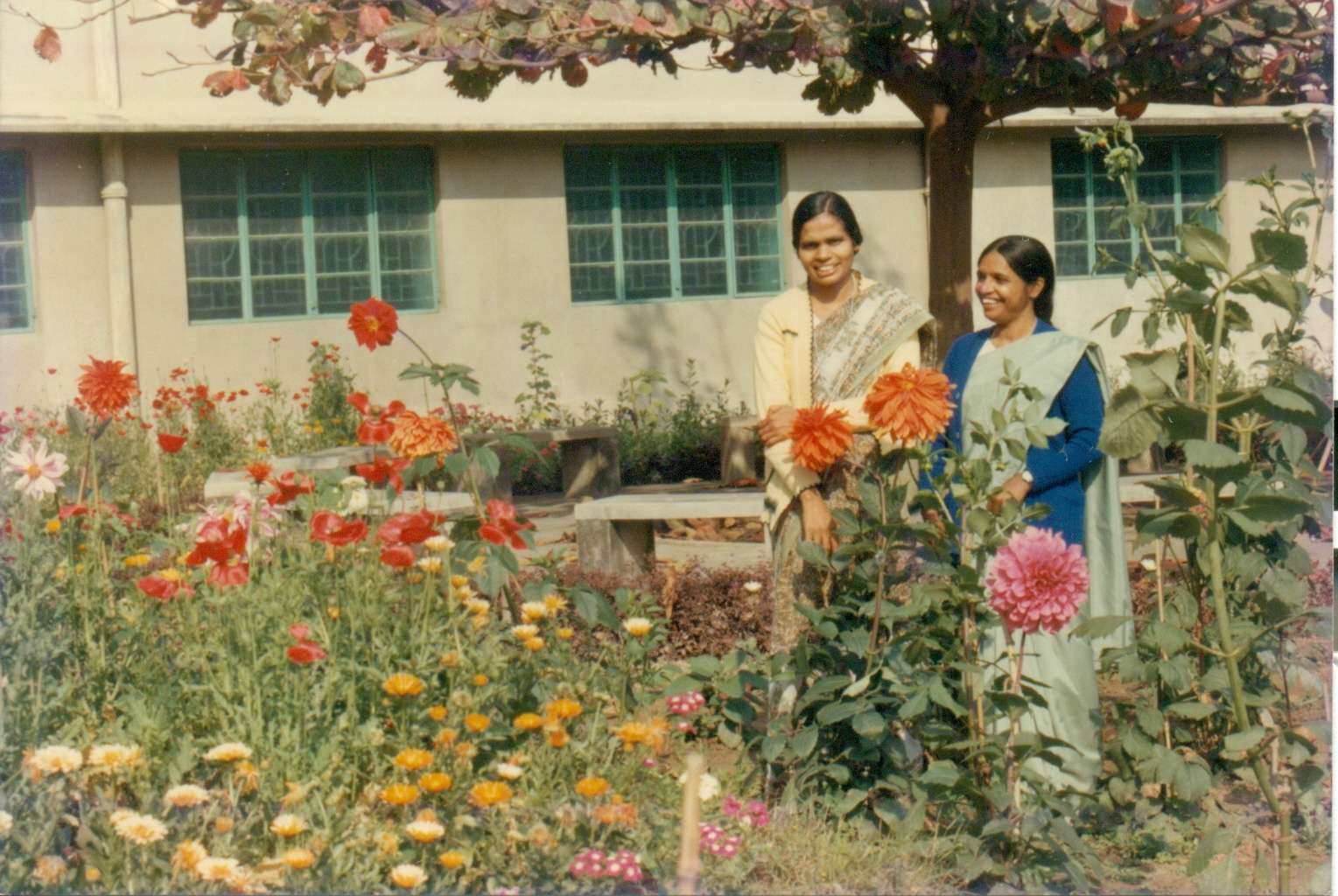 A mark of love is to stay close to the heart of the one loved – the Beloved – to listen well, to abide in and to keep word and deed together.

“ … Sunanda was one who made you glad. She had a keen and bright sense of humour. She was not the one to create fun, but she was among the first to see humour in a situation. Her presence and reaction could relieve a tense situation. My remembrance of Sunanda that will stay with me always, will be her sense of responsibility and her single mindedness. It was obvious that she wanted only to do the sensible thing – whatever would bring about the reign of God. She didn’t ask for recognition or praise”, excerpts from the sharing by Sister Patricia Mary Kelley at the prayer service for Sister Sunanda at Nazareth, KY.

Sister Patricia Mary gave a fitting eulogy for her novice: “… As a novice her reply to the question how she saw her ministry best fulfilling her vocation: ‘I want to work with the poor. I want to be poor with the poor people.’ She died as any other poor village woman, a victim of cerebral malaria which was not diagnosed till she became delirious. That made her completely poor. She will help us to integrate word and deed. These words of a poet can be applied to Sunanda. “Do not fear for me, you whom I have loved so much, for my roots and yours are forever intertwined.” 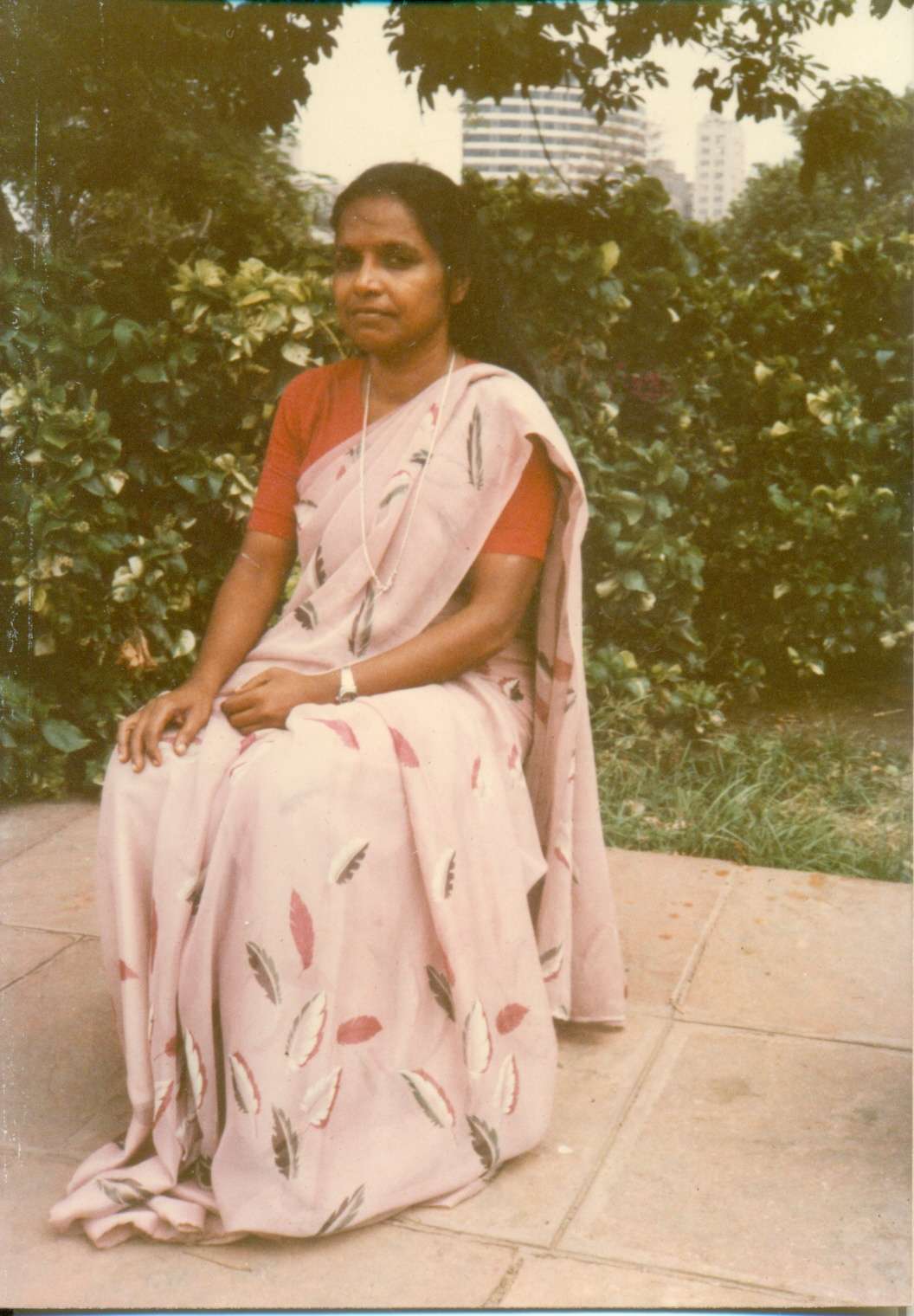 On June 23, Sunanda was admitted to Carmel Hospital, Mahuadanr, with malaria and discharged from the hospital within three days. She went to Daltonganj to co-ordinate a meeting of the school health personnel. Later, she visited Dhauwna for a couple of days. On July 22, Sunanda again set off to Daltonganj to get the needed medicines for the health centres under her care and later to Ranchi. On the way, she felt feverish and she treated herself at the bishop’s house in Daltonganj. On July 23rd, Father Tom Keogh, SJ, took Sunanda to the SCJM Sisters at Chianki who cared for her till morning of the 26th. The doctor diagnosed it as typhoid. When the Sisters in Sale came to know about Sunanda’s illness, Sister Janice Rathappillil, SCN, went immediately to Chianki to be with her. She was brought to Carmel Hospital by 2.00 p.m., and by then, Sunanda was very weak. Though medication was started for typhoid, Sunanda developed other complications. By next morning, she felt somewhat better, and Janice returned to Sale. Sister Rita Puthenkalam stayed with Sunanda. By late in the morning, Sunanda complained of fever, and shortly afterward, she went into delirium, one of the signs of cerebral malaria. The hospital did everything to save her, but she did not respond to any of the treatment. A jeep was sent to bring the priest to anoint her and get the Sisters from Sale. Sunanda did not struggle too long. Sister Rita, the Carmel Sisters, the deacon and a few others were around her praying. Sister Sunanda commended her life into the hands of her Creator Loving God at 11.20 a.m. July 27, 1991. It is poignant that Sunanda was to begin her annual retreat at Carmel on that very day. Her body was brought to Mokama by jeep. As soon as word reached Patna, many of the priests and religious came to the provincial house and made all the arrangements to inform the nearby communities. Sunanda’s body arrived in Patna at 2.30 a.m. and in Mokama by 6.30 a.m. At 2.30 p.m., Most Rev. Bishop Benedict Osta, SJ, presided over the Eucharist with seventeen other priests. Her body was interned at the cemetery in the Shrine compound. (Excerpts from Sister Sarita Manavalan, Provincial, shared before the funeral Mass).

Sister Rita Puthenkalam shared, “I remember Sunanda as a confident, quiet, methodical nurse, a person who could enjoy a joke, though not exuberant. One of her significant accomplishments was the training of her helper in her medical ministry. So much so, that after her sudden ‘departure’, her helper, a young woman from nearby village could carry on the medical ministry at Sale with quiet confidence until an SCN came on the scene after the lapse of several months, even a year, I think. I had the joy and satisfaction of being with Sunanda during her last hours. Being a quiet sufferer, we, her Sisters, were not aware of the seriousness of her health condition. Sister Janice was her bed-side attendant the previous night. I took over from Janice as she went to Sale in the morning. Sunanda was a very enduring patient, who cooperated with the doctor, nurses and her attendant and tried not to give any sort of trouble to anyone. Neither she, nor her doctor and I were aware that the end was so very near. During her last journey to Mokama, the road-sides in Sale and Daltonganj town were lined by people wishing for a last minute darshan (view) of her remains. Her quiet influence had reached all of them!” 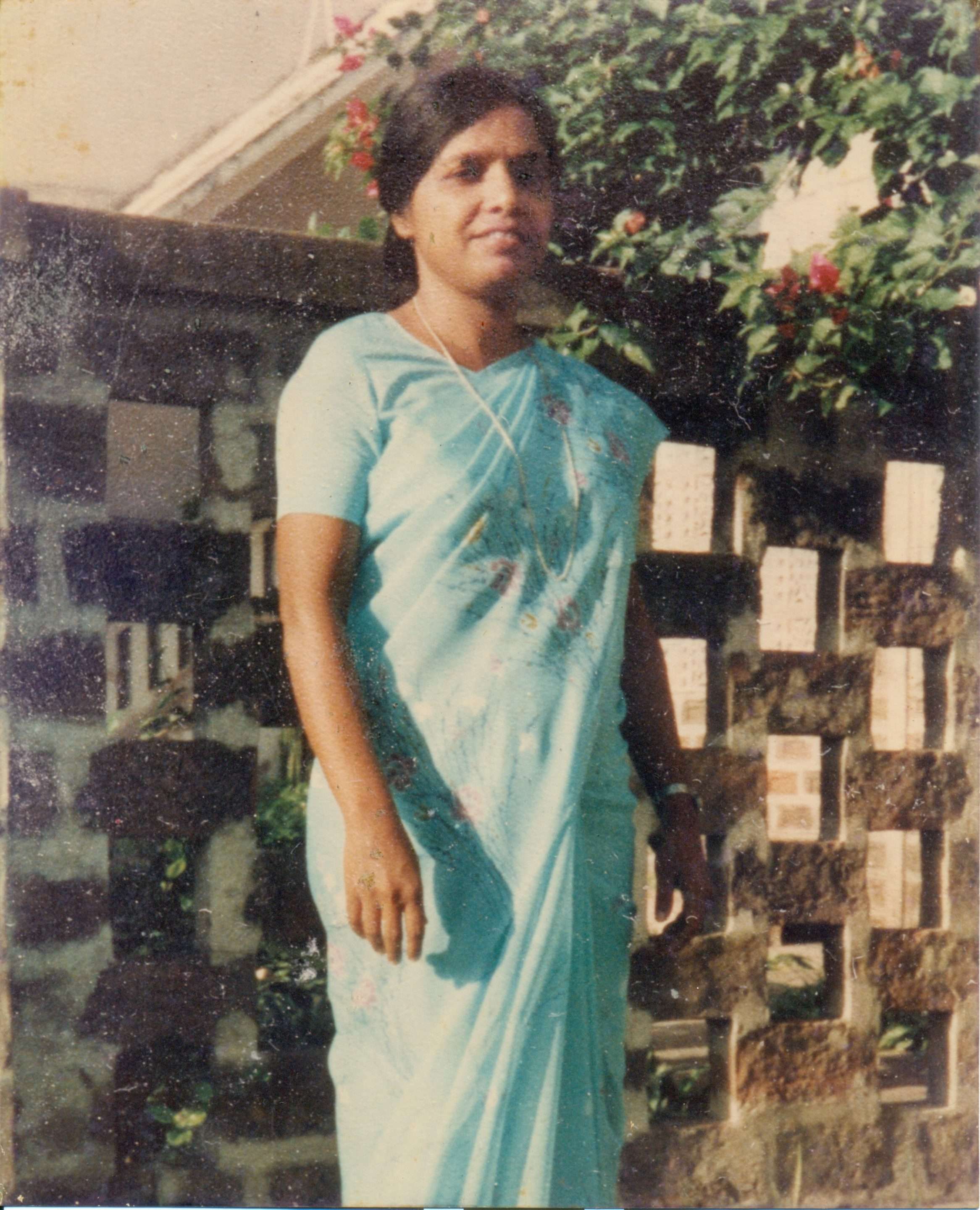 Her own sister in Community, Sister Joel, shared that Sunanda was very kind and loving. She helped many of the nursing students under her care financially and in their studies. She further said that every week Sunanda went to Dhauwna village to train the illiterate young women whom one of the diocesan priests was forming to become lay Sisters to serve the Brijia community. Dhauwna became her favourite village. Compared to other Tribes, Brijia is less developed and they are a diminishing community. Sunanda tried to save them by frequent medical visits. In her loving kindness, Sunanda kept meeting the needs of the people without caring for herself, which ultimately led to her death. Sunanda’s theme song was ‘Bridge over troubled waters’. Like the song, she laid her life down for the suffering, in order to be poor in death also.

Sunanda, thank you for showing us the way to live the Charism of St. Vincent de Paul in our lives, fearing neither suffering nor death. You were a brave heart. We continue to miss you especially so, as your companions celebrate their Golden Jubilee. Congratulations Sunanda, in your heavenly abode!