The suffering find a place of love and care

13
DECEMBER 2017
In Metsimotlhabe, a village north of the capital of Gaborone, Botswana, Sisters Sunila Erumangalathu and Vinaya Chalil administer a one-of-kind hospice for the sick called Pabalelong. It means a place of love and care.

Counseling, physical, spiritual, respite, and terminal care are what the hospice provides.

A short walk from the Sisters’ home, leads down a dirt road where a few street vendors sell snacks to passing school children. A man makes beautiful furniture from discarded wood pallets. This path brings you to the doorsteps of Pabalelong.

Inside the hospice, SCNs make sure patients receive the love and care they need to regain their strength. The Sisters are present everyday at 7 a.m. to the staff and hospice patients. They never miss a day. They hold hands with patients, share laughs, and exchange smiles as they walk the floor. Spirits are high among the patients and staff. 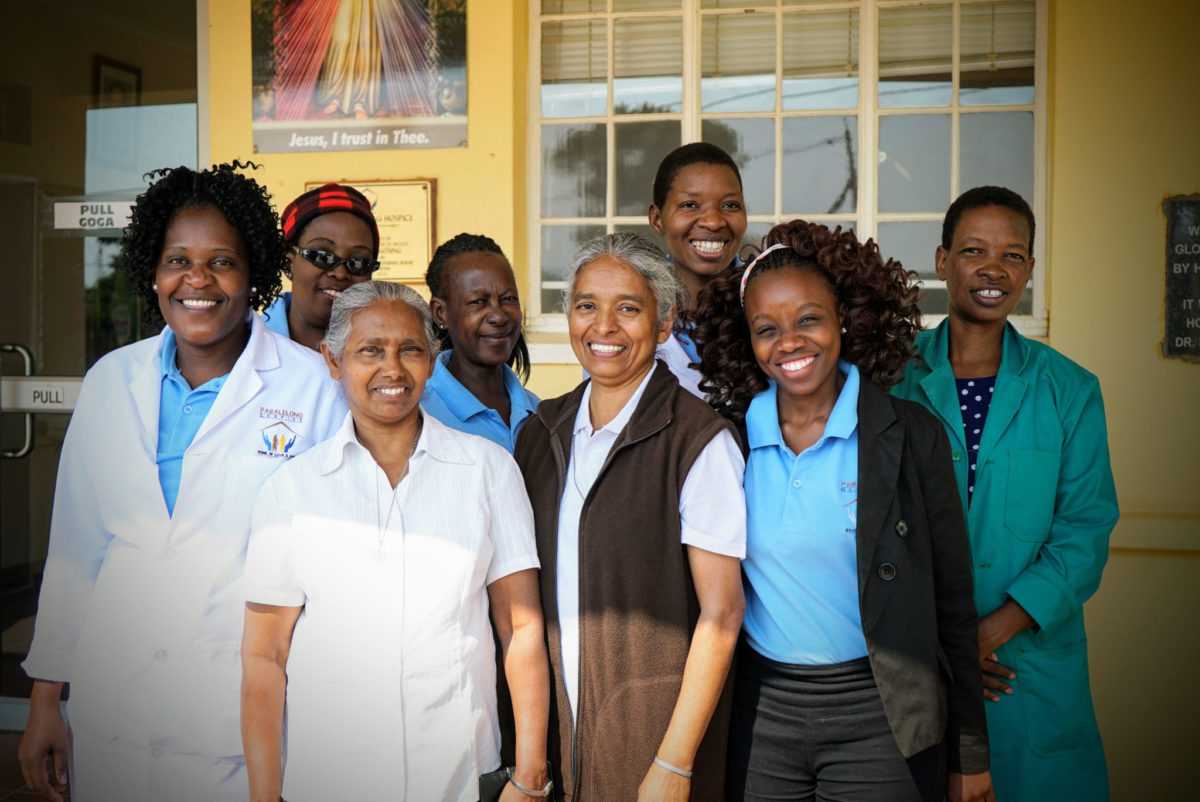 SCNs Vinaya Chalil and Sunila Erumangalathu, pictured front and center, stand with the staff of Pabalelong Hospice in Botswana, Africa.

Outside of the room for prayer and meditation, the daughter of a former patient recalls the care her mother received. “As her health got worse, there was a time that I could barely stand seeing my mother in pain,” she reflects. “With the Sisters and the staff here, I was relieved. She died a dignified death because of the support here.” 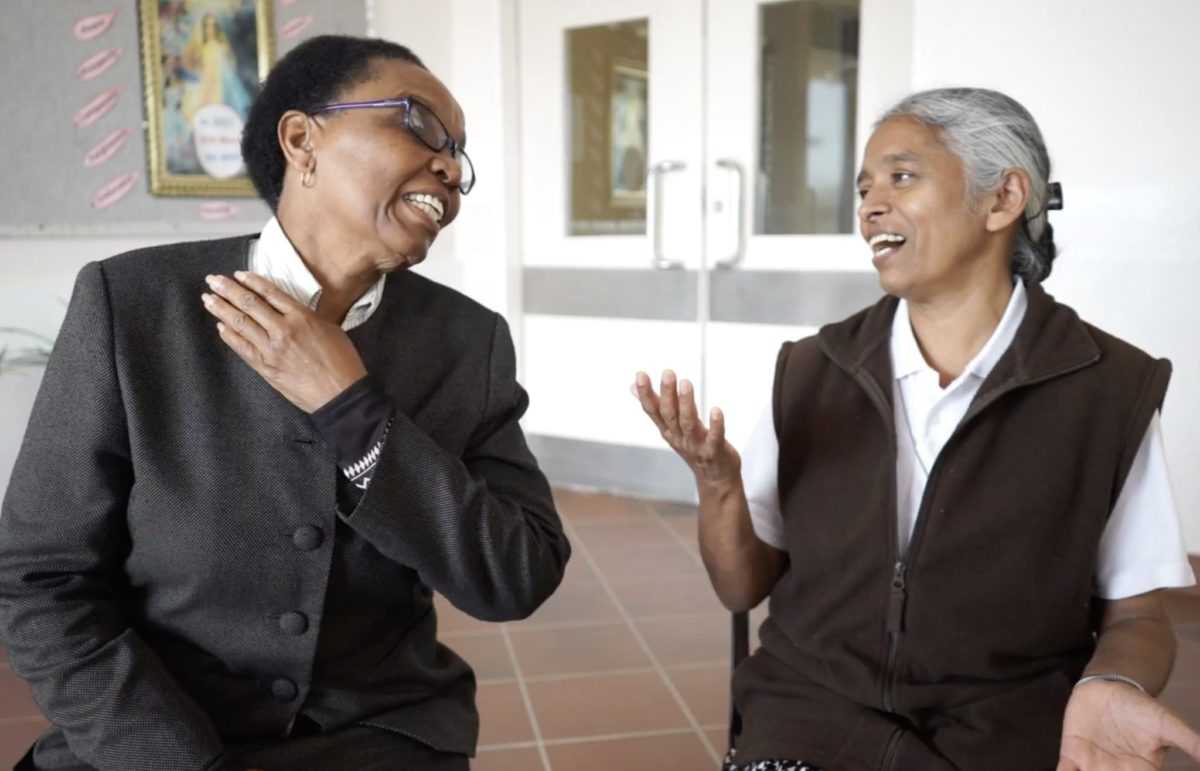 A daughter of a former patient talks with Sunila Erumangalathu, SCN, about the loving care her mother received. 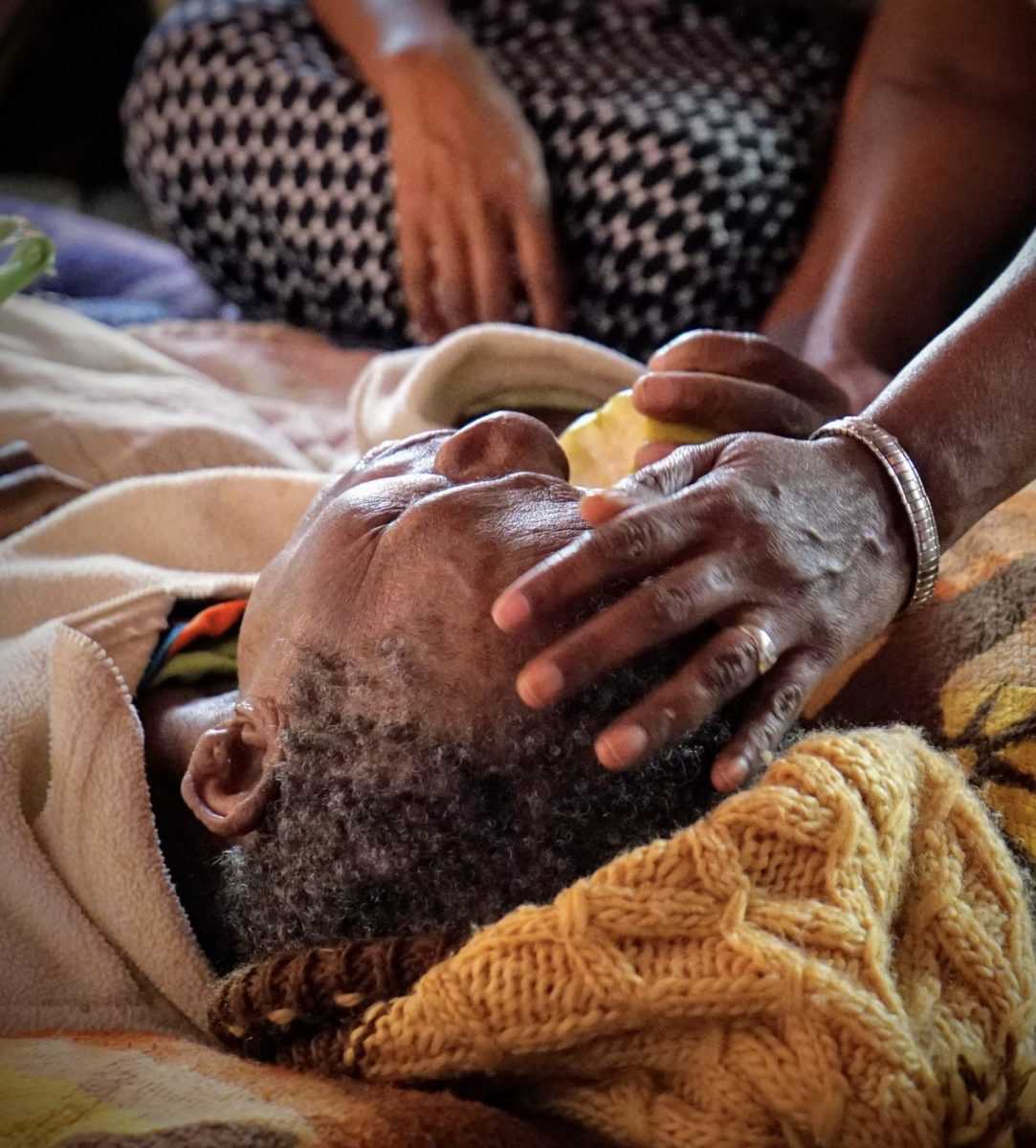 Sister Vinaya meets with an elderly woman receiving outpatient care at her home.

Sister Vinaya drives down a dirt road to check on one of her patients that is recovering. The patient, Setshego, is working in her garden amongst the roaming chickens, her return to health a miracle of sorts. Setshego smiles when she sees Sister Vinaya.

When she first became ill, Setshego didn’t know what was wrong and she had a hard time getting answers, doctors finally diagnosed her with TB meningitis of the spine. Completely paralyzed, she developed a large pressure sore on her sacral region. Doctors referred her to Pabalelong for terminal care.

The situation was dire. Setshego was weak, and needed intensive care. “Everything was painful, I didn’t know where it was coming from. I was just lost,” says Setshego.

At first she didn’t want to see the Sisters. In a state of pain and out of her mind, she didn’t recognize the help and support they were giving her. “I thought they wanted to kill me or something,” she recalls.

The medication would make her nauseous. The Sisters were very patient with her, they crushed her tablets to make it easier for her to swallow. They checked in on her family to make sure everyone at home was doing well.

Setshego’s son, Kabombosoa, took care of the family. He spoke of how he would hold his mother in his arms to try to comfort her. “I was doing everything I could for her, cooking for her, and washing her clothes,” he says.

During her six-month stay at the hospice, Setshego began to heal. She opened herself up to Sisters Vinaya and Sunila. “I realized all these Sisters want for me is to get better. All they wanted is life for me, the love they have given – I am so appreciative of it,” she shares. “Right now I am able to be at home because of the Sisters, and because of the hospice.” 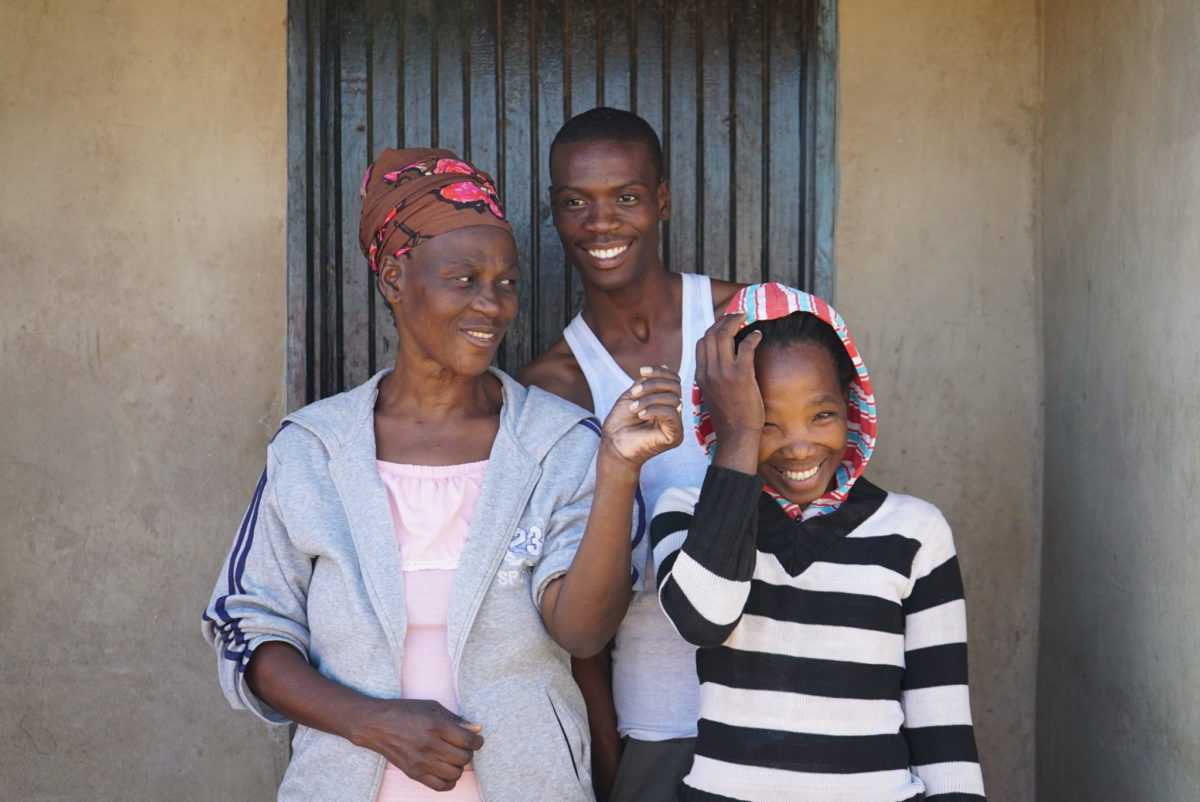 Setshego and Vinaya Chalil, SCN, talk about the progress she has made in her recovery. 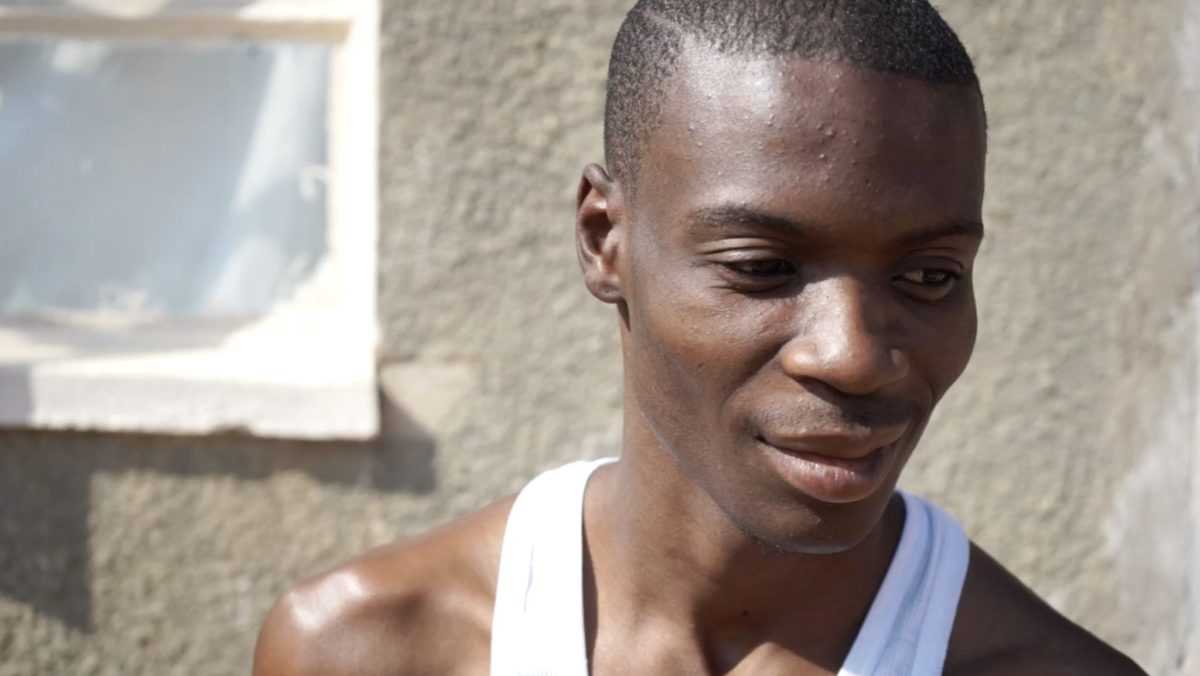 Setshego’s son speaks about his mother during her time of suffering, and how the family managed through the toughest times.

Gradually there was improvement, and when she was finally discharged, she was able to walk with a cane. “Right now I am very happy she is healed. She can even walk again. You can see her strength is increasing bit by bit. The hospice was taking care of us. They were even calling me, to make sure she was taken care of, and we had what she needed,” notes Kabombosoa.

As Setshego continues to grow stronger, Sister Vinaya checks on her, “Now she is back on her feet, gardening, working in the field, and she is getting back to a normal life.”

Walking down the halls of the hospice you can see the profound love and support the Sisters and staff are providing to those in need in Botswana. “It has been a great ministry, by the blessing of God,” says Sister Sunila.

Back at Setshego’s home, Sister Vinaya readies herself for her next home visit and says goodbye to the family. Sethshego holds Sister Vinaya’s hand and tells her in Setswana, “sala sentle.” Fitting words from a woman, who through God’s compassionate grace, has come far in her recovery. The saying, an endearing one, means “stay well.”

Want new articles sent to your inbox?
Subscribe to the Sisters of Charity of Nazareth newsletter.

Join the Sisters of Charity of Nazareth newsletter and stay up-to-date on the latest news. Learn about the Sister's daily life of prayer and their work at ministries around the world in Belize, Botswana, India, Nepal, and the United States.

More news from
the Sisters of Charity of Nazareth

Nineteen candidates entered into the pre-novitiate formation program during the morning prayer service in Chandapura.

“We’re hoping to be able to help people transform their lives and be a partner with clients to create a sustainable change,” she said. “The staff is good at accessing needs and building relationships, but they’ve never had the opportunity to journey with people for a period of time.”

A home for Sisters

During the past three years, the Sisters have laid a foundation of trust and compassion by their presence in Nongstoin. In March, the cornerstone for their convent home was laid and blessed. See how you can help us build upon this foundation.

Through small acts of kindness, Sisters lend a helping hand to one in need.

In front of a home on Cedar Street in West Louisville, the Sisters of Charity of Nazareth announced a $2.5 million dollar investment in the Louisville Urban League and its “A Path Forward for Louisville” work.

Sisters respond to the needs of COVID-19 patients

Three Tertians of the Sisters of Charity of Nazareth share their life and mission in responding to the needs of COVID-19 patients at Nazareth Hospital, Mokama.

Millions of Brood X cicadas are emerging across the United States. The first cicada sighting at Nazareth has occurred. Sister Kelly O’Mahony shares this shot taken on May 29, 2021. Have you spotted your first cicada yet?

Sister Jessie Saldanha is helping to coordinate an ambitious vaccination clinic in Karnataka. As head of the department of pharmacy, Sister Jessie and her staff at the St. John’s National Academy of Health Sciences, along with the leadership of the Community Health Department medical fraternity, assisted in coordinating the vaccination drive in the light of the wave of COVID-19 pandemic currently ravaging India.

Sisters Hema Santhosa, Prashanti Mandapati, Alisha Anthony daringly volunteered to give their service to the COVID-19 affected patients for a week in St. Philomena and St. Martha Hospitals respectively. They were deeply touched by the experience. They share the following reflections.

On May 22, 2021, at Nazareth Convent in Mokama, Sisters made commitments to their sacred religious vows, entering into a process of living out the values of the Sisters of Charity of Nazareth in lives based on poverty, chastity, and obedience.