From 6:30 a.m. to 7:30 a.m. the Navjyoti School compound in Dharan, Nepal, comes alive with around 100 children who come to study and do their home work with the help of two teachers.

Immediately after the morning community prayers, SCNs Jyoti Kerketta, Rose Toppo and SCN candidates Sherin Lepcha and Teresa Soreng are in the school along with the two teachers helping the students with their home work. Sister Rose takes English grammar. From kindergarten to Class eight, children who study in the Nepali medium school are happy to have the opportunity to study in this environment. Sister Jyoti distributed to the children note books, pencils and rubber.

After the morning coaching classes, the Sisters and the candidates go to regular classes which begin at 9:15 a.m. with the school assembly. 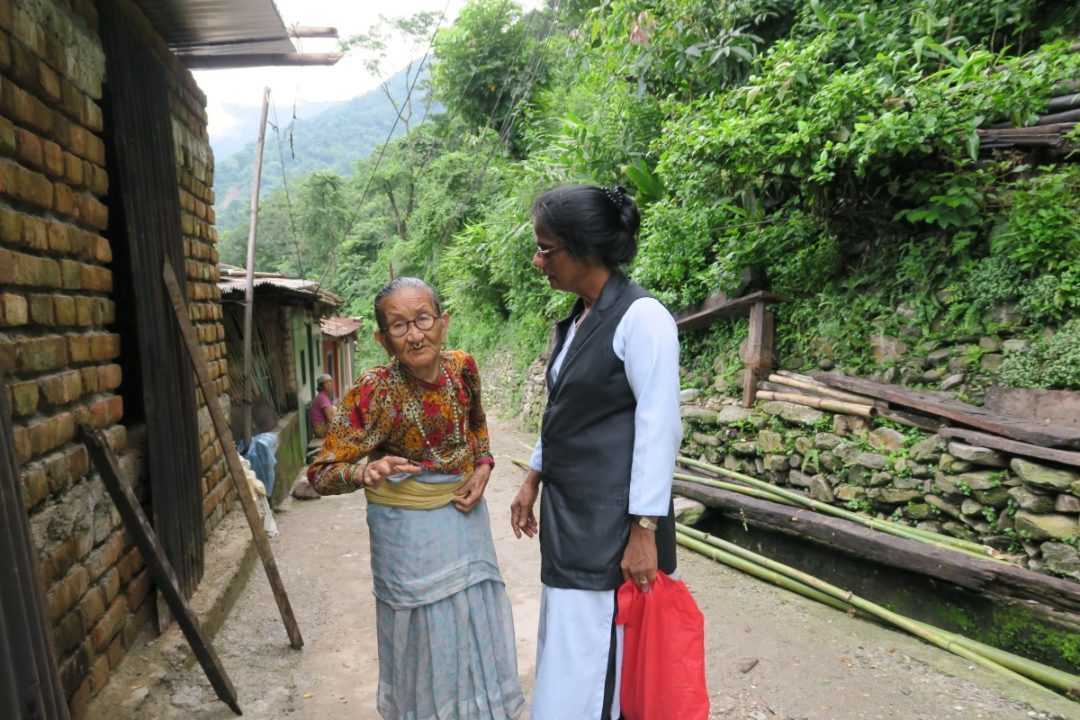 Sister Marina Thazhathuvettil traveling for her medical ministry in Nepal

Many parts of Nepal are totally shut down. Schools are closed down. The roads look deserted. The only mode of transportation are two wheelers, bicycles and ambulances. The government would like to divide the whole of Nepal into six provinces. Political parties and civilians are protesting the reorganization of Nepal into six Provinces. Many ethnic groups would like to have a province of their own. It looks to be a prolonged political struggle where lives have been lost and several have been wounded in various clashes.

In spite of this severe unrest and shut down, Marina Thazhathuvettil, SCN, continues to go to remote areas to distribute medicine to the sick and the old in an ambulance. When people try to stop Sister Marina, with a confident smile, she tells them, “It’s the medical vehicle.”

Sister Marina crossing a stream in a remote area of Nepal where she ministers to those with medical needs. pic.twitter.com/jtCNrUM0iq

They let her pass by. The old and the sick faithfully wait for her to reach the villages to check their blood pressure and get the medicine they need.

Besides giving medicine, Sister Marina reaches out to orphans, the poor, and those in need with food, hostel facilities for studies, and other materials. She asks shop keepers and banks for assistance to help. She has sent five young women for hospital assistants training in Gumla, Jharkhand, India.