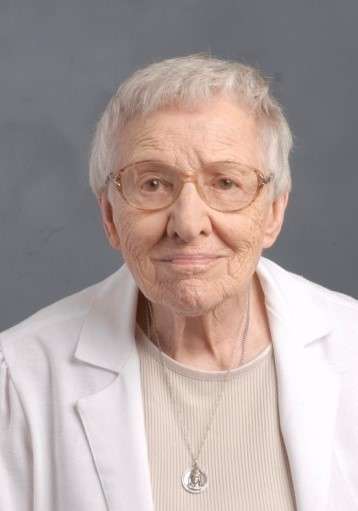 Miriam Catherine Corcoran, SCN, formerly Sister Mary Andrea, 96, a native of Louisville, Kentucky, died December 10, 2020, at Nazareth Home, Louisville. She was a professed Sister of Charity of Nazareth for 75 years.

Sister Miriam entered the novitiate in 1944. She was a lifelong educator and for over nearly six decades taught elementary, high school, college, and adult education students. Sister Miriam taught at St. Anne, Memphis, Tennessee, 1945-1947; La Salette Academy, Covington, Kentucky, 1947-1950; and Presentation Academy, Louisville, from 1950-1961, and returning from 1996-2015, in community outreach, where a scholarship was set up in her honor. In Massachusetts, she taught at Archbishop Williams High School, Braintree, 1961-1966, and pursued her doctorate at Tufts University, Medford, from 1966-1970. She was in London, England for periods of time in conjunction with Tufts in 1967, 1968, and 1969. She was in ministry at Spalding College (later Spalding University), Louisville, in various capacities, first in education from 1970 -1990, and later in outreach ministry from 1996-2015. Additional ministries include Confirmation Director at St. Thomas More Parish, Louisville, 1990-1994, and in SCN Community Service as a researcher/author from 1994-1996, writing about the SCN ministry of education, as well as producing a video.

Sister Miriam was greatly respected as a devoted educator in English, speech and drama, and as an historian. She mentored countless young women and kept in touch with them. Sister Miriam spent three months in India in 1986 teaching Novices. Throughout the lives of these young women, she took great care to keep up with their ministries. The Sisters say their time with Sister Miriam had a great impact on them. Sister Miriam was also active in social justice, vigils for peace, and could often be found attending funerals to honor the memory of those who had been part of SCN schools and ministries.

She is survived by extended family, and by her religious community.

In light of the pandemic, a Memorial Mass will be held at a later date. Sister Miriam will be buried in the Nazareth Cemetery on Tuesday, December 15, 2020, at 1 p.m. The prayer ritual will be private, but will be filmed and shared.