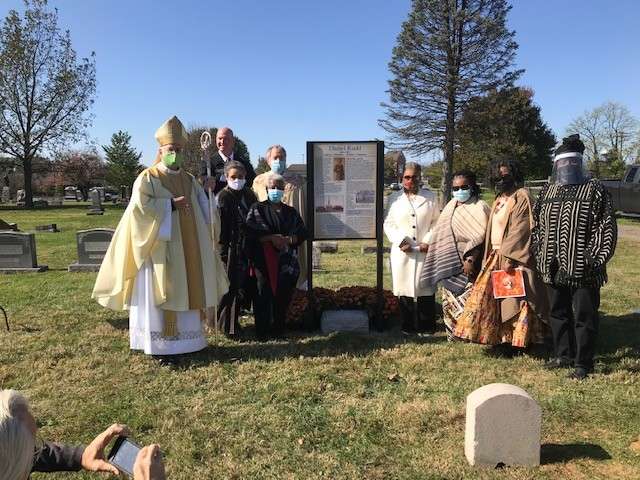 SCNS Marilyn Shea, Marlene Lehmkuhl, Rita Davis, and Susan Gatz joined parishioners from St. Joseph and St. Monica parishes along with others at the dedication of a two-sided panel near Rudd’s grave in the Catholic cemetery in Bardstown.

Born into slavery on the Anatok Plantation, Rudd, after Emancipation, moved to Ohio and went on to found the first Black-owned and operated newspaper, the American Catholic Tribune in 1881. He convened the Colored Catholic Congress in 1889, which became later the Black Catholic Congress which meets every five years. He spent some years in Mississippi and Arkansas as a businessman and educator. When he suffered a stroke, he returned home to Bardstown where he died in 1933.

The Archdiocese also donated two markers for Rudd’s parents when research found that those graves did not have proper markers. Archbishop Kurtz called Rudd, “a hero for our times … who lived consistently as a committed Catholic adult, seeking ways to work for justice.”