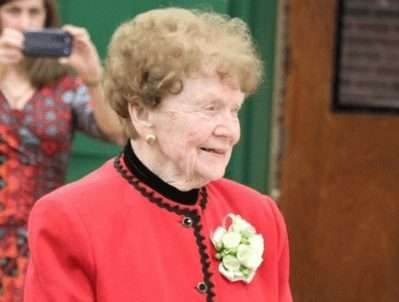 Sister Evie through the years

Seventeen years later that daughter of Bill Hurley and Alice Barry left her Boston hometown and entered the SCN Community. Her decision to make vows as a Sister of Charity of Nazareth surprised some, says Evelyn Hurley, SCN (Sister Evie). “I didn’t do too much serious thinking as a teenager,” Sister Evie recalls, adding she never talked about it much and, “didn’t even decide until the middle of summer.” A good bit of her decision to enter the Community was due to the example and influence of her teachers. She was taught by the SCNs from fifth grade until high school. Her father was away at the World Series when she made her announcement to her family that she would become an SCN, but when he learned of the news, he was proud. Her family, too, was very happy with her decision. So, in September 1932, Evelyn Hurley entered the Community.

Her ministry was education. She always preferred the primary grades. Sister Evie says, “I thoroughly enjoy working with little ones. They are so honest and simple. I had no real challenges.” She says this, even though in any given year, she could be responsible for many, many students, including the year she had 84 students in the first grade.

After teaching for over a decade in Kentucky, she and several other SCNs opened St. Elizabeth School in Clarksdale, Miss., in 1947. SCNs were already serving the parish in religious education when they saw a need for education for the children. Each Sister taught two grades, Sister Evie taught first and second. Three years later, she left Mississippi and returned to Boston, where she would continue her ministry in education for the next 64 years.

While in Boston, Sister Evie lived in a convent with 27 other Sisters in the early years, spending her days teaching the children at St. Brigid Convent. As the convent in Boston dwindled in size from 27 to 17, and then fewer, Sister Evie’s constant presence bonded her with the parish, school and surrounding community. She was the only Sister remaining when she decided to leave for the Nazareth Motherhouse this year.

Throughout her life, Sister Evie has had the gift of an amazing memory which friends attribute to her genuine interest in people. “I lived with Evie about 50 years ago. She was a marvelous primary teacher for her entire career,” says Julie Driscoll, SCN. “She made every little one in her classroom feel special and focused on each one in a way that her remarkable memory can give you names of those children, the row they sat in, and the seat in that row many years later! This same special interest carries over to every person she meets. She asks about a person’s ministry or job, their family and their special interests. And she will remember all this when she meets the person the next time and every time after that!”

Sister Evelyn also has a way of making friends wherever she goes. Sarah Ferriell, SCN, lived in “Southie” with her from 64–66 when there were 19 Sisters in the house. “She attended every wake and I think visited just about everyone in South Boston. Like her father who was a political figure, well known at the time of his leadership, Evelyn knew how to meet people and develop a broad base of friendships. … I was always amazed at her quality of ‘presence’ to the person and to the situation at hand.”

Boston resident, Ellen Paul McGovern, SCN, fondly remembers spending time with Sister Evelyn and her good friend Sister Mary Lucina. “My memories of Sister Evelyn (Evie) are numerous and too many to write. She and Sister Mary Lucina would have parties at St. Brigid’s convent and invite the Sisters. The laughter of Sister Evie and her way of making everyone feel at home was a special gift of hers.”

Though now at 99 years of age, Sister Evelyn is slowing down (she gave up driving last year), she is excited about her future and days to come at the Motherhouse at Nazareth. As word spread of her departure, her friends, her Sisters, and the community were sad to see her go. Former students even offered to pay her rent if she would stay put, but she told them, “No, I’m ready to go. This is the right decision at the right time.”

Before leaving, she was sent off with a marvelous celebration. A Mass of Thanksgiving was given to honor Sister Evelyn and her many contributions to South Boston. Hundreds turned out to honor Sister Evelyn, including City Council members, the president of the University of Massachusetts, and the former mayor of Boston. “It was a super celebration. Everyone enjoyed it and said that was the happiest party they’d been to, says Sister Evie. “They were always so good to me.”

Having arrived at Nazareth in April, Sister Evie quickly settled in. Not one to take it easy, upon moving into the Motherhouse, her friend, Joan Robishaw, SCN, noticed several huge shipping boxes filled with her things. Sister Joan called to offer to help her unpack, but Sister Evelyn had already finished the job herself! That really didn’t surprise Sister Joan.

So, as Sister Evie spends her days at Nazareth, she embraces this newest chapter of her life. “I’m at home, well adapted and very happy.”