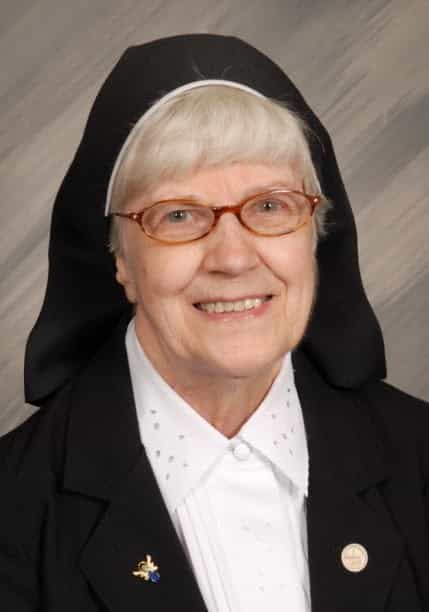 Colette Baran, SCN, was called to her heavenly home on March 16, 2021, at the age of 91 and in the 73rd year of her religious life. Sister entered the Congregation of the Vincentian Sisters of Charity from St. Mary Church in Uniontown, Pennsylvania in 1948 and transferred her vows to the Sisters of Charity of Nazareth when the Vincentians joined the Congregation in 2008.

She received her Bachelor in Education and Masters in Sociology/Anthropology degree from Duquesne University. Sister Colette experienced a wide and generous range of ministry experiences, from teaching elementary grades in the dioceses of Pittsburgh and Greensburg, Pennsylvania and Youngstown, Ohio, to teaching middle school students in Fonthill, Ontario, Canada, and high school students in Montgomery, Alabama. In 1967, she joined the staff at LaRoche College in Pittsburgh, Pennsylvania and became one of the first female department chairs at the college. A woman of intellect with a passion for social justice, she was part of a panel of American women of many faiths, who gave presentations to empower women to realize their importance in Church and society.

One of Sister Colette’s most enriching and challenging ministries was to the Native Americans at the Red Cloud Reservation in Pine Ridge, South Dakota, where she encountered the extreme poverty of the children she taught. In addition to her work in education, Sister Colette served as the Director of the Social Service program at St. Jude’s in Montgomery, Alabama and parish ministry at St. Michael Parish in Munhall, Pennsylvania. Always up to new challenges Sister Colette received a certificate in Canon Law and served in the Tribunal Office for the Diocese of Pittsburgh for a number of years. After she returned to the Vincentian Motherhouse, she became sacristan for the chapel until her retirement. Even in retirement, Sister Colette kept busy making lunches for the homeless and serving wherever help was needed. Health issues forced her to reside in the community infirmary, where she continued her service through her prayer ministry.

Although small of stature, Sister Colette was a ball of energy. She embraced life using her sharp intelligence, energy, and curiosity. Sister Colette died peacefully on March 16, 2021, at Nazareth Home in Louisville, Kentucky.

Sister Colette was preceded in death by her parents, Joseph Andrew and Mary Anna Baran, her brothers, John, Joseph, Paul, and her sisters, Margaret, Mary Clare, Helen and Anna Marie. She is survived by her nieces, Kathy Richel, Carol Cabot (Pennsylvania) and Sarah Baran (Ohio) and a nephew, Mark Zacovic (California). In addition, she is survived by grand nieces and nephews and her religious community.

The Mass of Christian Burial will be private for family only at this time at the convent chapel in Pittsburgh, followed by interment in the Sister’s cemetery on the convent grounds there. A memorial Mass celebrating her life will be held a later date.