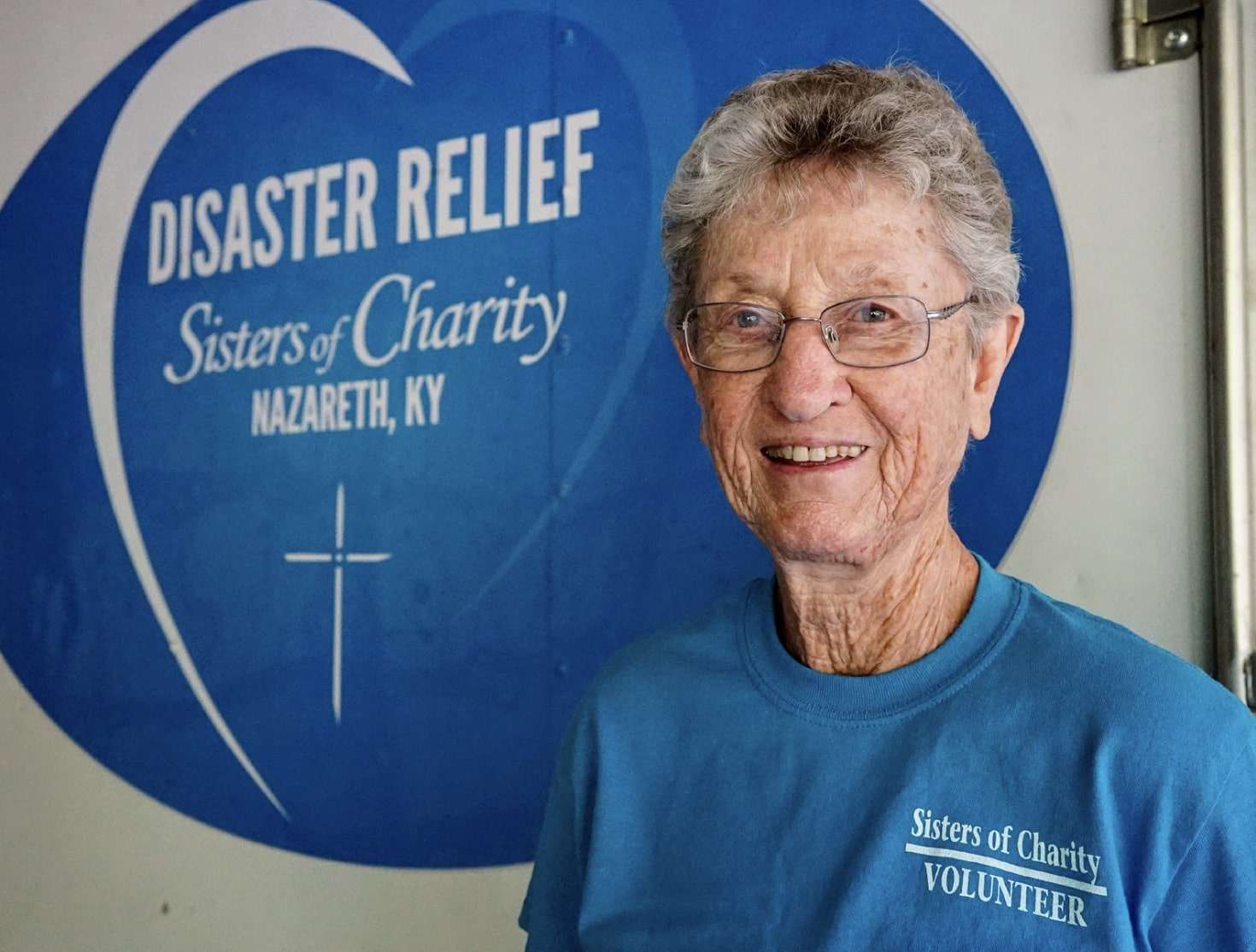 When the immediate emergency is over, the healing can begin.

“At first I sorted through people’s personal belongings, helping pick up the pieces of their lives,” recalls Kitty Wilson, SCN, of her recent experience helping families recover in the wake of tornadoes across the Southeast. “It was humbling because some had next to nothing … this was all they owned.”

The tornado outbreak in the United States on March 3, 2019, was severe. Forty tornadoes touched down across rural communities like Beauregard, Alabama. Watching the devastation on news reports from a distance, the disaster relief team of the Sisters of Charity of Nazareth felt compelled to put their faith into action.

Sisters have a long tradition of responding in times of disaster. Over more than 200 years, they have responded to flooding, the yellow fever epidemic, monsoons in India, hurricanes in Belize, and earthquakes in Nepal. Continuing in this spirit, the SCN Disaster Relief program invites volunteers to offer spiritual and physical support to persons experiencing a disaster.

Since the first training session held at Nazareth, Kentucky, Sister Kitty has volunteered with the Disaster Relief Program. After the tornadoes, she wanted to go to Alabama to reach out to the people of that area, to listen, and to offer prayerful support.

A team of eight, including Sister Kitty, age 80, were commissioned in Nazareth. They spent the next six days responding to their call to serve others by helping those affected by tornadoes in Lee County, Alabama.

Sister Kitty says the devastation was like nothing she has experienced. Everywhere the team traveled led them further into devastation and demolished homes. The team worked to clean debris from yards and homes, putting it along the side of the road to be picked up and removed. Sister Kitty sorted through personal belongings and picked up branches that were strewn about everywhere. She worked tirelessly to help clean up a pecan orchard so the couple who owned it could resume their livelihood.

Kitty Wilson, SCN, pictured next to the disaster response trailer. Since the first training session held at Nazareth, Kentucky, Sister Kitty has volunteered with the disaster relief program. Bottom: She recently traveled to Alabama with members of a disaster reponse team after tornadoes left a path of destruction.

The team helped gather the belongings of a man whose trailer had been destroyed. He was grateful that he and his family had been spared their lives. His daughter’s home was directly behind his and was lifted off its foundation. It landed 200 yards away. Remarkably, they all survived. It was extremely difficult for him to speak about what happened. Sister Kitty hugged him.

In a small cemetery, many gravestones were knocked over or damaged by the storm. The volunteers felt honored to lift the stones back into place out of respect to those buried there. No words could describe the sorrow in the depths of their hearts and the sadness felt for the community of Beauregard.

There was also plenty of work that required a chainsaw. “These were too powerful and too heavy for me to use, but I still wanted to try it,” says Sister Kitty.

Sister Kitty had never operated a chainsaw before, but she is not one to shy away from new encounters. With a little help, and donning safety equipment, she sawed a fallen tree branch. “I wanted to use the chainsaw for the experience. That will be my first and last time to use one!” says Sister Kitty.

The most challenging part of the disaster relief work was not wielding a chainsaw. For her, it is always listening to people who have lost almost all of their belongings. This time, as in past times, she spent her time offering hope through prayer.

“The SCN team is the best,” shares Sister Kitty. “In the face of the disaster, they maintain a hard-working and fun-loving attitude.”

“All of the people I met, and there were many along the way, made an everlasting impression on me. One man took me to his wife who was very sick and couldn’t get out of bed. She was happy I visited her and she let me give her a blessing.”

Thankful that the Sisters of Charity of Nazareth have a disaster relief program whose team members can be called upon at a moments notice to help others, Sister Kitty says she feels honored to be a part of the team. “I feel blessed beyond words to be an SCN, walk humbly with God, and to have this opportunity to volunteer. I know people who are hurting want someone with whom to pray and share faith. They want a compassionate listener.”

As a final gesture of honor, before everyone headed back to their homes, Sister Kitty prayed with the team in front of the 23 crosses erected for those who lost their lives to the storm. The ages of the deceased ranged from six to 65 years. For volunteers, this was their deepest emotional experience of their time in Beauregard.

The SCN Disaster Relief members continue to be prepared for the next moment that they may be of service. In the spirit of St. Vincent de Paul, they strive to respond with reverence for each person and to witness God’s presence in the midst of adversity to those most in need.