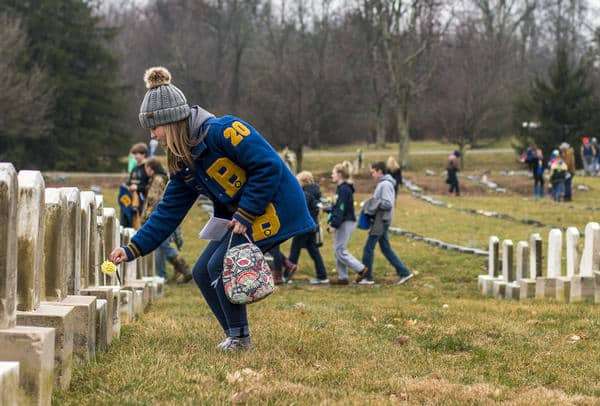 Flowers are placed Friday on the graves of sisters who previously taught at Bethlehem. The act was part of a special presentation that recreated a ceremony in which Bethlehem students took part more than 100 years ago.

In 1912, during Nazareth’s centennial year, students of Bethlehem Academy boarded the local train and traveled a short distance to the campus where, upon their arrival, they visited the cemetery to decorate each grave with a flower. On Friday, 107 years later, students of that same Catholic school re-created the ceremony as part of its own bicentennial celebration.

This year, the train required two trips to bring all of the students, staff and chaperones of the school over to the campus, where they attended a short ceremony at Crimmins Hall before walking over to the cemetery to place flowers on the graves of more than 350 Sisters of Charity who had served Bethlehem over the course of 200 years.

The Sisters of Charity founded Bethlehem Academy in 1819 as a day school at the request of the Bardstown community. Sister Rita Davis, who portrayed SCN founder Mother Catherine Spalding during Friday’s ceremony, asked the students to remember the first three SCNs who began the school — Harriet Gardiner, Polly Beaven and Nancy Lynch.

“May their spirits and the spirits of all others who served at Bethlehem bless you for your kindness,” Davis said.

“I’m excited about this because I think it’s really cool,” said Principal Tom Hamilton, adding that few organizations last 200 years, but Nazareth and Bethlehem have each met that milestone.

“What is it that works and makes it last?” Hamilton asked the students. “It starts, first of all, with faith and the Gospel. You’ve got to have something to lean on, and it never fails to lean on Christ. The other thing the Sisters of Charity have taught me very well is that you have to look forward, you have to see things coming and you have to adjust to those things.”

Both groups have evolved over the years, Hamilton said, and that ability to adapt and grow is what Bethlehem hopes to instill in its students.

“That’s the lesson that the Sisters of Charity have shown us. That’s the lesson that we’ve all learned,” Hamilton said. “When you leave here today, you know that you have, as I’ve been saying, walked in the footsteps of giants. They have led you to here right now, and they will lead you onward for the rest of your lives.” 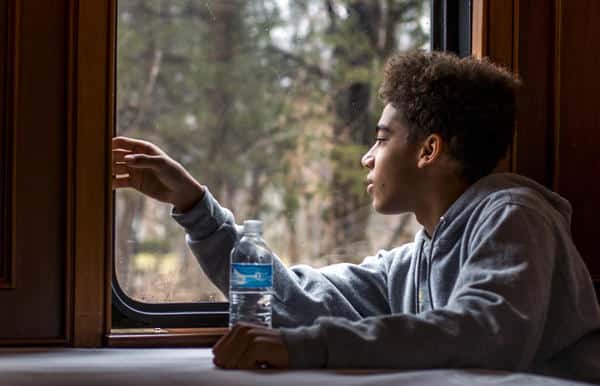 A Bethlehem student looks out the window of his car while riding the Dinner Train to Nazareth Friday. Students road the train and visited the gravesites of Sisters of Charity, recreating a ceremony the school did 107 years ago.