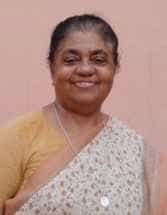 After making first vows on September 27,1975, Sister Amala first taught at Nazareth Academy in Gaya, India. The following year, she moved to Sokho, India, a remote mission, and taught students in the primary grades at Nazareth Bhavan. In July 1980, she went to Ranchi for the four-month perpetual vows preparation. After making perpetual vows, she returned to Ranchi, India and earned her Bachelor of Arts at Nirmala College.

In July 1983, she was assigned to Nazareth Dhaan in Barauni, India, a newly opened mission, as one of the pioneers. In 1985, she earned her Bachelors in Education from Loreto College, Calcutta, India. She next taught at St. Augustine’s School, an English Medium school in Vasai, Maharashtra, India.

After eight years of teaching in various schools, in 1987, she became the headmistress of St. Joseph’s School in Barauni. She was also the coordinator of the community. Sister Amala continued her teaching ministry throughout India, she taught in Biharsharif in 1992, and Hilsa in 1993.

In 1996, Sister Amala celebrated her Silver Jubilee, after attending a renewal program at the Benedictine Ashram in Bangalore, India. In 1997, she was appointed headmistress of the parish school in Biharsharif, India. Four years later, she became headmistress of St.Xavier’s Middle School in Mokama. She also actively participated in all the parish activities, especially helping to prepare for the annual shrine feast. In 2008, she became the first principal of the newly established English Medium School in Chatra, India.

In May 2009, she was part of the three-month global exchange program at Nazareth, Kentucky. Upon her return to India, in September 2009, she joined the Jamtara community, and was the coordinator of the community. In the initial years, she also taught in Maria Niketan Vidyalaya, Bewa, in Jharkhand. She assisted students living in the hostel with their studies, and would also visit nearby families. She knew many parishioners, members of other religious groups, and neighbors, as well as others in the town. Most recently, Sister Amala had been engaged in pastoral ministry in Barauni.

Sister Amala had a strong calling to serve the marginalized, and always expressed gratitude to God, family, the SCN Congregation, and all the persons who walked with her on the road of life.

She is survived by her brother, two sisters, and by her religious community.