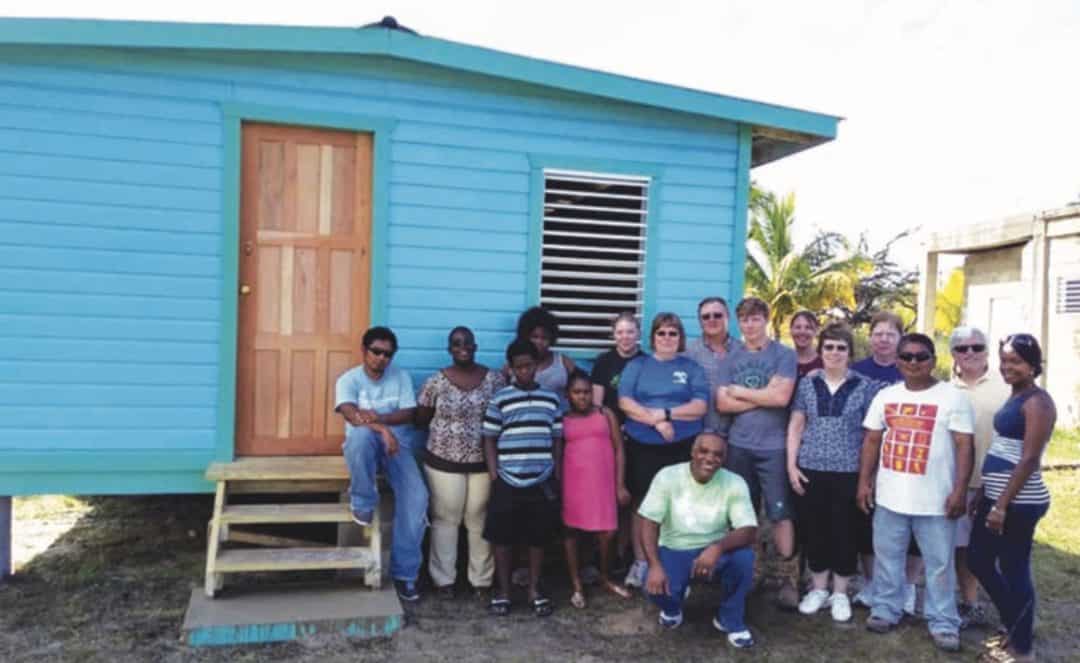 By Matthew A. DiCenzo | The Steubenville Register

LITTLE HOCKING — A house was built recently in Belize City, Belize, from donations received in memory of Andrew Reed, who passed away in May 2017 in an automobile accident.

Volunteers joined the Sisters of Charity of Nazareth, Kentucky, and Hand in Hand Ministries, located in Louisville, Kentucky, and Belize, in building the home for a family in need. Reed’s parents, Steve Reed, who is pastor of Faith Full Gospel Church, Long Bottom, and Sue Reed, a parishioner of St. Ambrose Parish, Little Hocking, who reside in Reedsville; his children, Anthony Reed and Trinity Reed; Sister of Charity of Nazareth Chris Kunze; Rita Rodgers and Jack Reis, both parishioners of St. Ambrose Parish; and Catherine Paulus, a parishioner of St. Sylvester Parish, Woodsfield, built the 16-by-20-foot structure. An orientation and commissioning ceremony were held in Nazareth, led by Sister of Charity of Nazareth Luke Boiarski, director of the lay mission volunteer program for her community, as well as a Diocese of Steubenville native.

Steve and Sue Reed spoke of how the idea to donate toward a house being built in Belize began. Interested in a mission trip, the Reeds decided it would be fitting to donate money toward a house to be built, in memory of their son, for a family in need. They said that parishioners of St. Ambrose donated toward the house, too. As for the trip, each participant in the group covered their own expenses to go to Belize.

The family in Belize that received the home was a woman with three children. Sue Reed spoke of the connection she had with the family, stating: “The family who received the home was separated because of poor living conditions … our home felt separated because of the loss of our son.” She said the building brought closure and healing for her family. Steve Reed said, “It was a fantastic trip – really it was a retreat for us.” He added, “I am glad I went … there is a lot of need in Belize.”

The Reeds and Rodgers said it took the group three days to construct and paint the new home. Rodgers, who has attended mission trips before with the Sisters of Charity of Nazareth, said recipients are required to help on several other houses before they are placed on the schedule to receive their own home. She explained that Hand in Hand Ministries holds the deed for the house for 10 years before giving it to the owner. Recipients of the homes must keep the house in good condition and keep their children in school, Rodgers added. They are also required to attend 12 life skill sessions.

After the house was finished, Rodgers said the volunteers blessed the house and presented gifts to the family, which included a cross, welcome mat, lantern, a picture of the crew, a picture of Andrew Reed and the keys to the home. Rodgers and the Reeds described this as a very emotional moment for everyone involved.

Rodgers said when speaking about the trip: “It is so rewarding,” stating that she gets more out of the experience than the people that receive the homes. She said, “I am so touched with what I see.”

The Reeds expressed similar feelings, speaking of how spiritual the trip was for them. Describing it as “an incredible trip and experience,” they shared the story of how their grandchildren enjoyed the mission trip, stating how they did not want to come back home. The Reeds said they plan on making another trip to Belize and are looking forward to returning.

Rodgers and the Reeds said they encourage people to attend a mission trip in the future. Rodgers said she would tell someone who is considering going, but may not feel like they are able to do the work: “If you are an able body – someone in good health – there is something everybody can do. … There is a job for everybody.” Steve Reed said it was a “bonding experience” for the group, and Sue Reed said you could feel the warmth and love from the people, which was spiritually unifying.